Why are airlines routinely dousing their passengers in insecticide? - The Canary 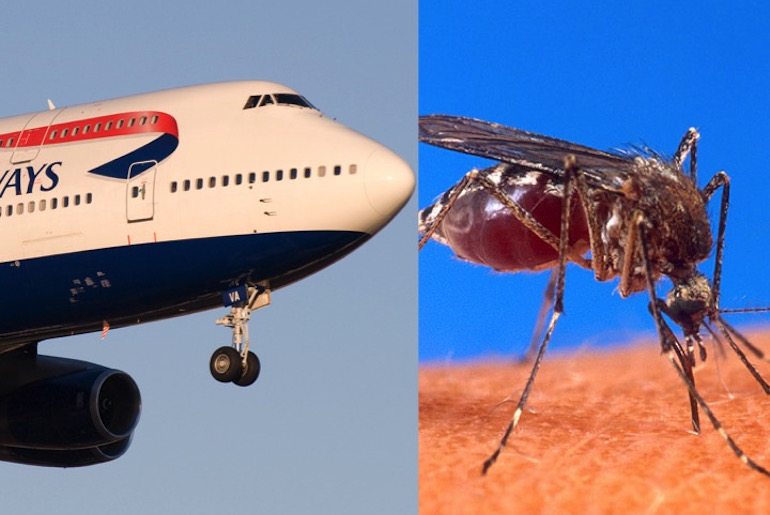 The UK government is asking flight operators to make sure planes, passengers, and luggage returning from countries with confirmed transmission of Zika virus are sprayed with insecticide.

Often, this will happen, without notice, once you are on board the plane. Someone took this footage of the process, which seemed to displease the cabin crew:

The aim is to kill the mosquitoes carrying the Zika virus, but will it have an impact on your health too? And does it even work?

Insecticides have been used to “disinsect” planes for years; the World Health Organization (WHO) requires planes returning from areas with diseases like malaria and yellow fever to disinsect. The UK usually requires this measure on flights returning from affected countries, and the new measure extends the list of countries to those with Zika virus.

It doesn’t take a WHO (World Health Organisation) report to tell you that there is the possibility of inhaling the insecticide and absorbing it through your skin, but there is one, from 1995. You can read it here.

With any potential toxin, the question to ask first is always “what’s the dose?” What the WHO report tells us is that the form of the insecticide, low pressure conditions and length of exposure on a flight do not give you a dose that will cause serious or permanent harm. However, it can cause some irritation to the eyes, nose and mouth.

Higher doses of pyrethroid insecticides – the type used on planes – can cause tremors and seizures but recovery is usually swift and complete, within a few hours. These chemicals can also cause a tingling sensation on the skin, which can last half an hour to three days.

Given the understanding of the mode of action of pyrethroids and low exposure from aircraft disinsection it is unlikely that this procedure will precipitate or influence any pre-existing disease of passengers and crew.

But this report is more than 20 years old, and research has moved on since it was published. Recent studies have revealed potential adverse effects on sperm, reproductive hormones and pregnancy, according to a review published in the International Journal of Hygiene and Environmental Health. The researchers say more work is needed to find out exactly what the risks are. They say:

Additional studies are necessary to further evaluate the long-term effects of pyrethroid exposure, especially in groups that may be regarded as being at special risk, such as children and pregnant women.

This could have implications for people with higher exposure to the insecticide, like flight attendants, but it isn’t clear yet whether there is an effect, and how pronounced it could be.

What we do know is that there haven’t been any obvious negative effects on passengers or crew over the decades that insecticides have been used in this way. So if there is an effect, it’s likely to be subtle.

On the plus side, the pyrethroids wreak havoc with stowaway mosquitoes, reducing the risk of Zika virus emerging in the UK.

Spraying insecticide is a highly precautionary measure to reduce the risk to passengers during flights to the UK. I want to reassure people that the risk to the UK population is extremely low.

Some cases of Zika virus have already been reported in Europe, including 20 in the Netherlands. But in all cases, people were infected in South America, not Europe.

Other insect-borne viruses, such as schmallenberg and bluetongue virus, are thought to have spread over land or short expanses of water, like the Channel, on the wind. But in the case of Zika virus, the mosquitoes would have to travel across the Atlantic to reach Europe – a vast expanse of water for such a small insect and too far for them to survive the trip, even if the wind was blowing in the right direction.

Disinsecting planes means stopping the mosquitoes from traveling far from their source. This is done by spraying insecticides in the cabin, either before or while the passengers are on board, or by treating the plane’s interior surfaces with insecticide. Mosquitoes are usually susceptible to the insecticide, so any of these measures can kill them successfully.

However, there have been many documented cases of “airport malaria” – malaria infections in people who had not disembarked from the plane in a country where malaria is endemic. According to a WHO report released in 2000, disinsection methods can fail to kill all the mosquitoes on a plane, especially if they’re inside a passenger’s baggage.

There is also increasing evidence of mosquitoes becoming resistant to pyrethroids. In 1998, researchers looking at cases of airport malaria in France suggested alternatives to pyrethroids should be developed for use on planes:

Despite pyrethroid resistance in Anopheles ganzbiae S.S. in West Africa, the efficacy of aircraft spraying with permethrin aerosols is still acceptable. However, surveillance of resistance should be improved and search for nonpyrethroid insecticides suitable for aircraft strongly encouraged.

At the moment, though, using the insecticide is still the only option for controlling mosquitoes on planes. As researchers continue to investigate the virus, its transmission and its prevention, the advice remains to avoid affected areas and cover up. Jane Ellison said:

We advise people travelling to affected areas to reduce the risk of themselves being bitten by wearing mosquito repellent, long sleeves and trousers. Pregnant women should consider avoiding travel to countries with the Zika virus – or if travel is unavoidable, they ought to seek travel health advice from their GP or a travel clinic well in advance of their trip.

So if you’re planning to travel to an area affected by Zika virus, make sure you’ve checked the most up-to-date advice before you jet off. And if you have reason to suspect you could have a reaction to the pyrethroids used on the plane, seek medical advice before you fly. We’ll do our best to keep you updated with the latest credible information as the story develops.