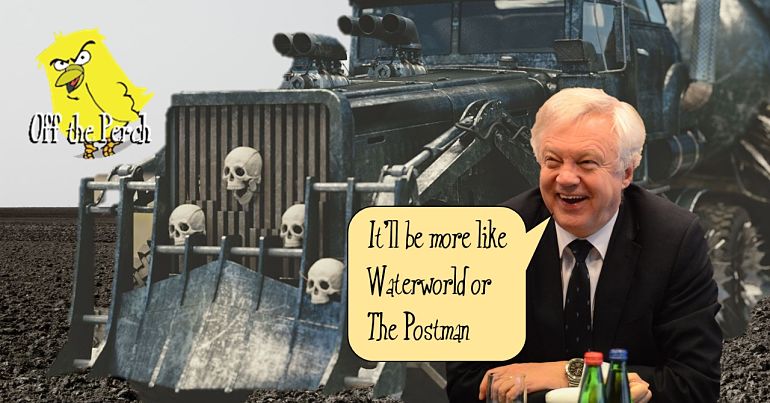 Brexit Secretary David ‘Dave’ Davis has confirmed that the UK after Brexit will have nothing whatsoever in common with the Mad Max films.

This comes as no surprise given that the series originated on a shoestring budget and was characterised by everyone pulling together to create something truly special.

Instead, Davis has indicated -in a rare moment of clarity, that Brexit Britain will more closely resemble such follies as Waterworld and The Postman. They stand as testament to the vanity of rich men and were characterised by everyone getting in a pickle and producing something truly woeful and unnecessary.

Off The Perch understands that Davis’s use of film metaphors stems from a classified briefing paper. Officials at the Department for Exiting the European Union (DExEU) wanted to summarise the impact assessments in a form Davis could actually understand. So they produced a list of possible outcomes:

OK, so admittedly it’s an absolute liberal luvviefest, but everyone muddles along OK in a terribly British way. And the UK prime minister is actually free to stand up to the US.

Although the single market option seems to be papering over the cracks, there’s a constant suspicion that all’s not well and a choice made in the past could have terrible consequences.

Rather Hard Brexit – The Beach

As Boris and Liam cavort around the world hoovering up free trade deals, everything seems rosy. But then, perhaps because of the unstable characters involved, it all goes to shit. Which brings us to:

Shit Brexit – The Road or, if we’re lucky, How I Live Now

No wonder Dave was shy with the details.