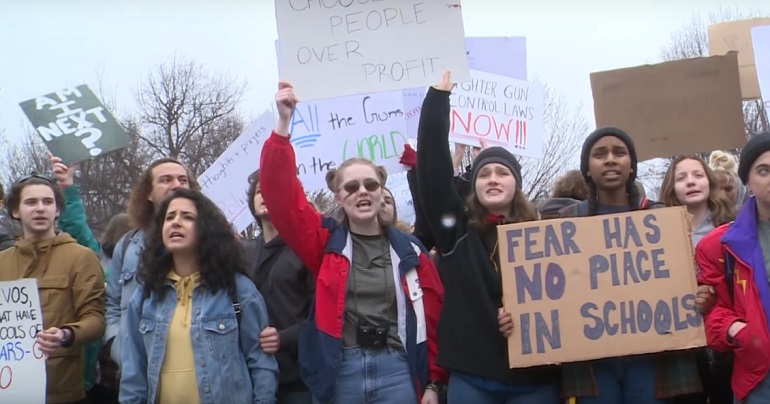 On 14 February, 17 people died in Florida following the “deadliest shooting at a US school since 2012”. As The Canary previously reported, young survivors sent an unequivocal message to Donald Trump. They criticised his response to the tragedy and demanded a review of gun laws in the US.

A week on, thousands of young people across the country have joined the protest. And they are not backing down.

On 19 February, students from the DC area staged a protest outside the White House.

There is a growing sense that the Florida tragedy has “awakened something” powerful in young people:

Kids today are so entitled that they don't even want to be massacred at school. Watch out, NRA, you've awakened something you can't stop. https://t.co/oZ5tiYPihk

It’s now a call that’s being heard all across the country. And it’s just beginning. The goal is simple: Pressure Republicans to stop blocking gun safety legislation and to break the NRA’s grip on common-sense solutions to gun violence.

The protests are growing nationwide. On 14 March, there are plans for a mass school walkout. The message is clear. Young people have had enough:

Join us 3/14 10am across every time zone for 17 minutes. #ENOUGH #nationalschoolwalkout pic.twitter.com/CThfqTnvcZ

A #MarchForOurLives demonstration is also planned in Washington on 24 March. This movement is powerful because, although initiated and led by young people, it has widespread support.

My message to every high school kids in America:

Do what we couldn't. Lead.✊🏾#MarchForOurLives

Support is gathering, and there is a growing sense of solidarity across the US:

David Hogg and Emma Gonzalez both survived the Florida shooting. And since the event, their eloquent passion has empowered thousands in the US. On 19 February, as the first victim was buried and Trump played golf, Hogg said:

This is atrocious, golf over children's blood?!?! What does that say about our future. You are either for or against the children and right now your against them. This is why we must take action because these politicians won't. @realDonaldTrump https://t.co/fCwq7xK2bK

Gonzalez is also a powerful advocate for change. At a rally over the weekend, she gave a powerful speech at an anti-gun rally:

If they accept this blood money, they are against the children. They are against the people who are dying. There’s no other way to put it at this point. You’re either funding the killers, or you’re standing with the children. The children who have no money. We don’t have jobs. So we can’t pay for your campaign. We would hope that you have the decent morality to support us at this point.

The voices of Gonzalez, Hogg and the thousands who stand with them will not go away. Mass school walkouts have already started.

WATCH: Students from Florida's West Boca High School have walked out of their classes, heading towards Marjory Stoneman Douglas High School, as part of a call-to-action by students in the area after the mass shooting last week that killed 17 people https://t.co/JoGj3r547e pic.twitter.com/yqeNwj9PVM

The message from these young people is clear. Through them, perhaps change will finally come. Perhaps they have started a long-needed revolution in the US. Because any alternative doesn’t bear thinking about.