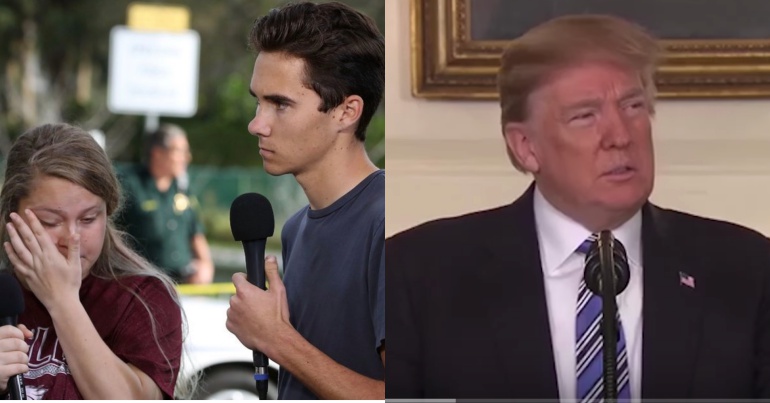 On 14 February, 17 young people died, following the “deadliest shooting at a US school since 2012”. US President Donald Trump offered “prayers and condolences to the families of the victims”.

But young people who survived the shooting have spoken out. Trump’s ‘condolences’ are not enough.

97 children have been killed and 126 injured in mass shootings in schools since 1989.

Only seven weeks into 2018, this is the eighth shooting in a US school causing death or injury. And as a viral cartoon on Facebook states:

In his televised response to the tragedy, Trump did not mention gun control.

But survivors have spoken out in direct challenge to Trump. Their voices are powerful: 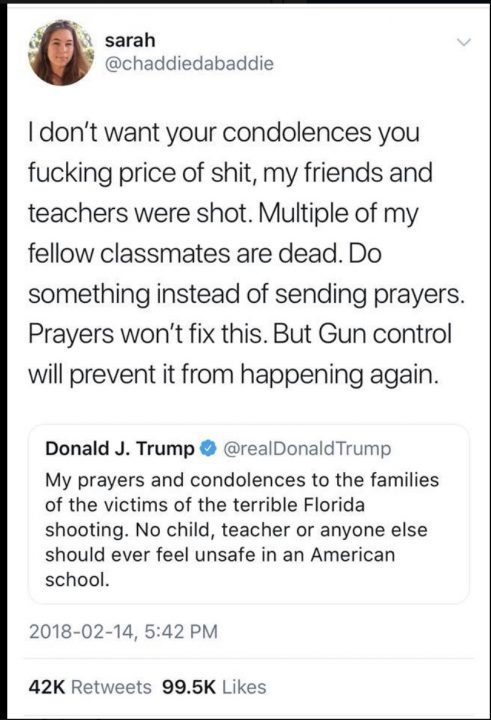 “We’re Children. You Guys Are the Adults.”

David Hogg, a student at the school, interviewed fellow survivors as they hid in a classroom:

“This shouldn’t be happening anymore… no amount of money should make it more easily accessible to get guns,” says one.

Hogg recorded another student, who’d previously been “fascinated by guns”. She explained,”this experience has definitely changed my viewpoint”. And she went on to say:

We need more gun control in our country… [it’s] a problem in our society.

When CNN asked if Hogg had a “message for the lawmakers… for Congress… for the President?” he said:

Please take action. Ideas are great, ideas are wonderful and they help you get re-elected… But what’s more important is actual action… that results in saving thousands of children’s lives.

We’re children… You guys are the adults.

The National Rifle Association (NRA) is a powerful force in America. It has spent “tens of millions of dollars… in support of gun rights”. Since 1989, NRA and “gun rights interests” groups have also given “about $41.9 million” to election candidates and parties:

Nearly 90 cents of every dollar of that money went to Republicans.

Following his election victory in 2016, Trump told the NRA:

You came through for me, and I am going to come through for you… I am here to deliver you good news: the eight-year assault on your second amendment freedoms has come to a crashing end.

But the fact remains that, despite being too young to buy beer, Cruz was legally able to buy an AR-15 assault rifle about a year ago.

Trump said in his speech:

We are here for you. Whatever you need, whatever we can do to ease your pain.

Young people have now spoken, giving Trump a very clear message explaining what they need. The voices of these young people caught up in this tragedy are unequivocal.