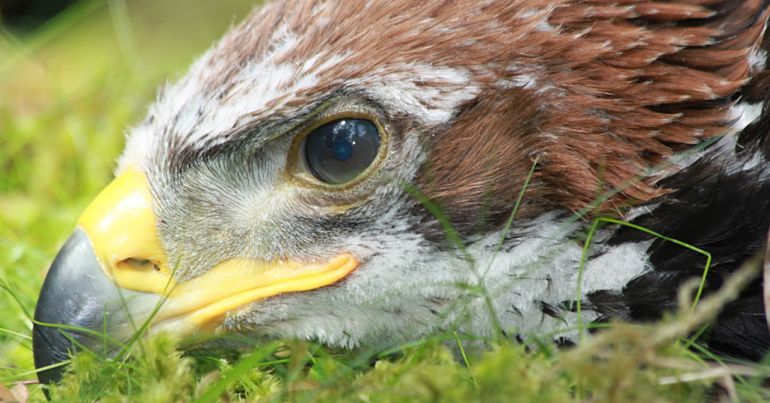 TV naturalist Chris Packham was part of a team that fitted satellite tags to a number of young golden eagles last summer. The tags help scientists understand the eagles’ behaviour and see where they’re living. They can also provide evidence in the all-too-common event of an eagle dying in suspicious circumstances.

In January, the team noticed that the tag on an eagle called Fred had suddenly stopped transmitting. The last position was in woodland near a grouse moor just south of Edinburgh. It’s highly unusual for tags to fail, so this generally means bad news for the bird. But then something truly strange happened. Fred’s tag began transmitting again. Ten miles out to sea. The tag transmitted for another couple of days before stopping for good. Its last position was about 15 miles offshore. Investigative blog Raptor Persecution UK, which was part of the tagging team, has published the transmission maps.

Packham travelled to the woodland where Fred apparently last roosted to tell his story. And then he made the short trip to Holyrood to speak to the Scottish government’s Cabinet Secretary for Environment, Climate Change and Land Reform, Roseanna Cunningham:

As Packham explains, the link between game shooting and disappearing birds of prey is too strong to be ignored. The Canary has previously covered driven grouse shooting here and here. We’ve spoken about the threat to hen harriers in particular, as well as to raptors close to lowland pheasant shoots, and the fact that England no longer has a single resident golden eagle. Earlier this year, Bradford Council ended driven grouse shooting on the publicly-owned part of Ilkley Moor. Campaigners are continuing to push for either strict licensing or a complete ban of driven grouse shooting. The apparent untimely death of Fred the golden eagle will add urgency to those calls.

– Keep up to speed with Raptor Persecution UK.