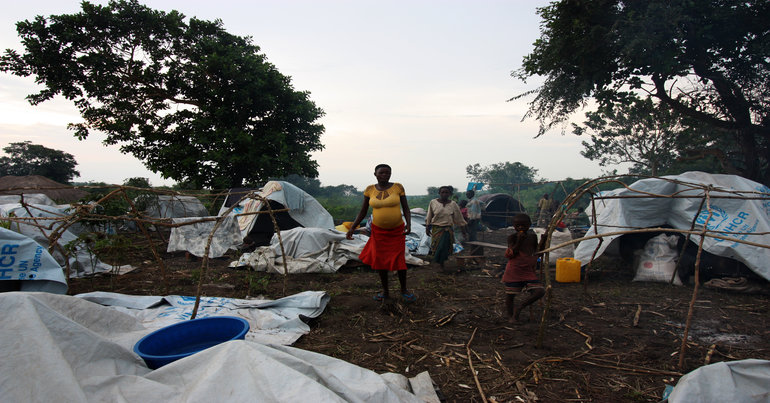 A fresh outbreak of ethnic violence in the Democratic Republic of Congo (DRC) is forcing tens of thousands of people to flee into neighbouring Uganda. But the East African nation’s ability to welcome Congolese refugees is being crippled by corruption and underfunding. I have seen this with my own eyes.

The mainstream media, meanwhile, continues to peddle the myth that Uganda is “one of the best places to be a refugee”. And this blinkered approach is making the emergency worse.

On 13 February, the UN Refugee Agency painted a bleak picture of the situation:

Last week, over 22,000 Congolese crossed Lake Albert to Uganda in three days, bringing the total number of people from the DRC arriving in the country to about 34,000 since the beginning of the year.

The report describes the perilous journey the refugees are making:

The refugees use small canoes or overcrowded and rickety fishing boats, often carrying more than 250 people and taking up to 10 hours to cross. [We are] saddened by reports of four Congolese refugees feared to have drowned after their boat capsized.

These are East Africa’s ‘boat people‘.

BBC Today on 12 February explained how the refugees have had to take great risks to save their lives. In the report, ‘Mama Jemima’ tells the BBC why she fled:

They have attacked many villages with axes and machetes. They kill people and cut them up.

After describing “scenes of chaos”, BBC reporter Anne Soy concludes by trotting out an established cliché:

The Ugandan government gives them each a plot of land, and materials to put up new homes. Finally, there is some sense of hope and a new beginning.

My director at Duncan Lewis Solicitors, Toufique Hossain, and I have recently been to Uganda. We visited a number of refugee settlements in the west of the country. We wanted to see for ourselves whether Uganda really is “the Most Refugee-Friendly Country in the World”.

There, we saw the bleak truth behind the glossy eulogies. Refugees, many of whom are victims of rape and ethnic violence, now find themselves facing the demons of hunger, discrimination and corruption.

There is no doubt that Uganda has pioneered the ‘self-reliance’ approach to hosting refugees recently adopted by the UN. In Uganda, refugees have the right to work, to education, to healthcare, and have freedom to move around the country. Families in settlements are also given a plot of land.

In reality, as a World Bank report [pdf, p6] acknowledges, refugees in Ugandan settlements merely enjoy a “semblance of self-sufficiency”.

The settlements we visited are now officially full and closed, but long-time residents of the Kiryandongo settlement told us that this does not stop corrupt government officials receiving bribes to register new residents. Refugees just need to slip officials the equivalent of £10 for an individual, or around £60 for a family, to register as residents.

Each time a new family is registered, one group of mothers told us, their land diminishes:

When they register someone new, they just take some of your land and give it to the newcomers.

We also heard accounts of a previous settlement “commandant”, Walter Omondi, selling tracts of land allocated for refugee use to a local tribe:

If you complain, they just arrest you.

The rumps of land left to each family are insufficient to sustain them. One family we spoke to told us that their plot has shrunk from one acre to less than a third of an acre. The little land left is of poor quality, as a result of the climate, soil conditions and overuse [pdf, p2].

Smaller plots and poorer soil mean that the refugees cannot feed themselves or grow cash crops.

And the UN Refugee Agency and World Food Programme cannot make up for this shortfall. In January, the UN reported a funding gap of $393.9m [pdf, p1] for 2018.

The consequences of this funding shortage are severe. We met a group of Congolese refugees one chilly morning in Rwamwanja, a settlement in the west of Uganda. They told us of their hunger:

In Congo, we had enough to eat. We had plantain, cassava, avocadoes, groundnuts, rice, maize, fish; here, we run out of food before the end of every month.

“Look!” interjected an old man, jerking up a shirtsleeve to reveal his emaciated forearm, “in Congo I was strong, now I’m a skeleton.”

For too long, international media outlets have simply praised Uganda, placing all blame on foreign governments for failing to provide sufficient aid. And the international community has clearly shirked its moral obligations. But Uganda is far from innocent.

Uganda currently ranks 151 out of 176 nations in Transparency International’s corruption index, rubbing shoulders with Tajikistan and Zimbabwe. Such “severe” [pdf, p2] corruption is actively discouraging international donations. This is especially true because foreign governments know that the UN Refugee Agency’s hands are tied in its operations by the Ugandan government.

In 2012, for instance, when news emerged that $12.7m in donor funds had been embezzled from the Ugandan government, the EU, the UK, Germany, Denmark, Ireland, and Norway all suspended aid.

Things have not improved since then. In the past few weeks, the Ugandan government has suspended the Commissioner for Refugees and three of his senior staff. The UN country representative has accused them of abusing refugee funds by inflating the numbers of refugees. One of these officials is Walter Omondi, the settlement commandant who allegedly sold off refugee land.

Again, the UK, US and EU have now threatened to withdraw funding. This would be catastrophic. The UK alone sends around £100m [pdf, p1] in aid to Uganda every year.

Ugandan government corruption should not be used as an excuse for the international community to ignore the unfolding refugee emergency. As Babar Baloch, the senior regional spokesman for the UN Refugee Agency, warns:

This is not a time for donors to look the other way. This is time to stand in solidarity with Uganda to fix the system.

The media can also help to fix the system by acknowledging the extent of the corruption.

In Uganda’s capital, Kampala, we met the director of the Refugee Law Project, Dr Chris Dolan. We were angry at the discrepancy between what we had seen in the refugee settlements and what we continued to read in the media. “The difference,” Dolan told us, “is that you listened to refugees.”

Dolan explained that most journalists and diplomats are guests of the government. They go on carefully arranged tours of the refugee settlements organised by the UN and the Ugandan government. And the government selects the refugees that the reporters meet.

In this way, reporters are fed the narrative that Uganda is a paradise for refugees, which they churn back into the media.

Indeed, in the short term, this positive narrative guarantees the flow of funding on which thousands of refugees and officials depend.  But in the long term, this wilful blindness encourages a lack of accountability. This surfaces in the form of corruption scandals which threaten funding at crucial moments like this one. As Dolan insisted:

Listen to the refugees!

If journalists listened to the Congolese refugees already in Uganda, it’s hard to see how they could conclude as optimistically as the BBC‘s Anne Soy did in her recent report.

If the media does not engage constructively and critically, corruption will reign unchallenged. And the international community will continue to use this as an excuse not to provide enough aid. Ultimately, only the corrupt benefit.

Unless the world starts listening to the elderly man we spoke to rather than to misleading media reports, he and many others will continue to starve.

– Donate to CARE International, which is working in East Africa to support refugees.

– Donate to the Xavier Project, which works with refugees in Uganda to provide education.

– Ask your MP to push for greater funding for the DRC’s refugee emergency.