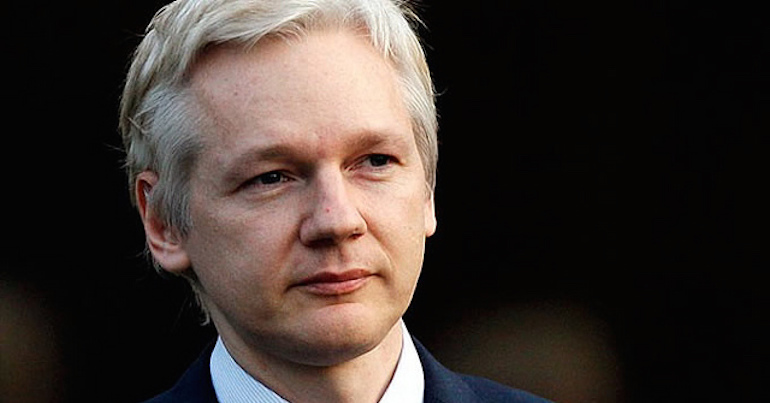 Documents released under Freedom of Information requests to Italian magazine La Repubblica confirm the very close relationship between the Crown Prosecution Service (CPS) and Sweden in the Julian Assange case. The files contain hundreds of mostly redacted emails sent over a five-year period. But according to one authoritative source, the number of CPS documents relating to the case may be much greater than has so far been disclosed.

In May 2017, the Swedish authorities announced they had ceased all remaining investigations into alleged sexual assault by WikiLeaks founder Assange. But the Metropolitan Police arrest warrant for skipping bail would remain in force. Subsequently, Assange’s legal team sought a ruling that the Met warrant should be rescinded, but the court ruled otherwise.

The emails between the Swedish Prosecuting Authority (SPA) and the CPS show that the latter was closely involved in the Assange case at every stage.

In one such email, dated 25 January 2011, a CPS lawyer advised the SPA not to send someone to the UK:

My earlier advice remains, that in my view it would not be prudent for the Swedish authorities to try to interview the defendant [Assange] in the UK.

In August 2012, in response to an article saying Sweden could withdraw the warrant against Assange, a CPS staffer (name redacted) warned [pdf, p1] Sweden’s Director of Public Prosecutions Marianne Ny:

Don’t you dare get cold feet!!!

we have found us to be obliged to consider to lift the detention order… and to withdraw the European arrest warrant. If so this should be done in a couple of weeks. This would affect not only us but you too in a significant way.

However, it took three and a half more years for that to happen.

There were even sarcastic exchanges [pdf, p192] between Ny and a CPS person (name redacted) about Assange and crayfish parties.

In an unredacted set of emails seen by The Canary, a CPS lawyer emphasised to Ny just how important the Assange case was:

It is simply amazing how much work this case is generating. It sometimes seems like an industry. Please do not think this case is being dealt with as just another extradition.

Another email from the CPS lawyer to Ny provides an indication of the sort of working relationship they had:

I am sure you can guess what I would love to send you as a Christmas present [i.e. Julian Assange].

And the extensive correspondence [pdf] between the CPS and the SPA from December 2010 onwards may prove crucial in throwing further light on that working relationship.

This is summarised as follows [pdf, p68]: 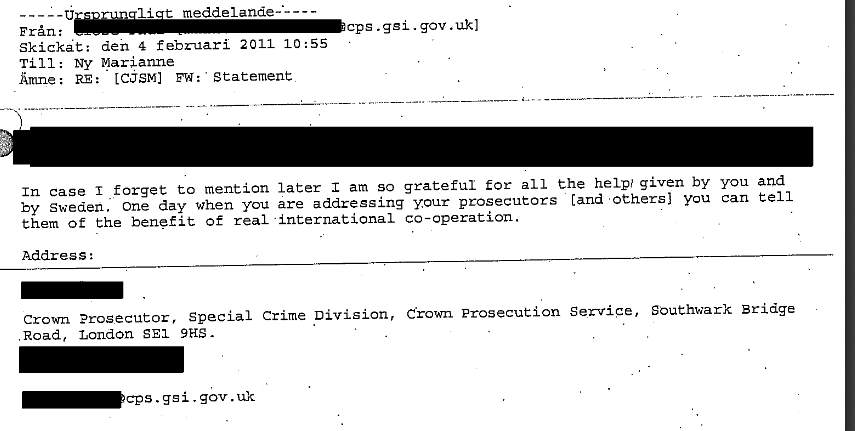 In the meantime, Assange remains in the Ecuadorian Embassy because he suspects the US has a sealed indictment for his prosecution. In a 2013 affidavit, Assange even stated the grand jury case number:

In Alexandria, Virginia, a Grand Jury has been empanelled for the past three years to explore ways to prosecute WikiLeaks for its publishing work. It has identified seven civilians, including the “founders, owners or managers of WikiLeaks”. The Grand Jury’s case number is 10GJ3793.

And the late Michael Ratner, Assange’s US lawyer, was certain about the most likely charge:

Indeed, US Attorney-General Jeff Sessions has called Assange’s arrest a “priority”. CIA director Mike Pompeo, meanwhile, said the agency was working to “take down” WikiLeaks. And former FBI director James Comey told Congress that the only reason Assange had not been apprehended was because he is still in the Ecuadorian Embassy.

In a July 2012 email to Ny and others (names redacted), the sender describes [pdf, p3] how the Assange files (“A-related” emails) are organised:

Marianne and I file all A-related emails in special folders, not available to or traceable for anybody but ourselves.

In a recent audio interview, award-winning journalist John Pilger goes further, saying he believes Assange was “set up”, and describing the CPS emails as “scandalous”.

The CPS has admitted that it destroyed key emails relating to the Assange case. Indeed, in advance of the recent court hearing, the CPS wrote to La Repubblica, saying:

all the data associated with Paul Close’s account was deleted when he retired and cannot be recovered.

The CPS says this is standard procedure.

The CPS has disclosed some material which is very limited. We know there is more.

The CPS declined to comment to The Canary on whether the emails suggest its relationship with the SPA was inappropriately close. When asked whether there were additional emails, and whether unredacted versions would be released, the CPS told The Canary:

You would have to make an FOI request. Some text is usually redacted to ensure any releases under the FOI Act does not breach legislation including around data protection and security.

The full CPS file on Assange is estimated to contain between 7,200 and 9,600 pages. Meanwhile, Gareth Peirce, Assange’s solicitor, is considering an appeal against the latest ruling. Should that go ahead, no doubt she and the rest of Assange’s legal team will want to see those documents, as well as unredacted versions of the CPS/SPA emails already available, including the heavily-redacted 2014-15 correspondence [pdf].

Anything less would only raise further questions.