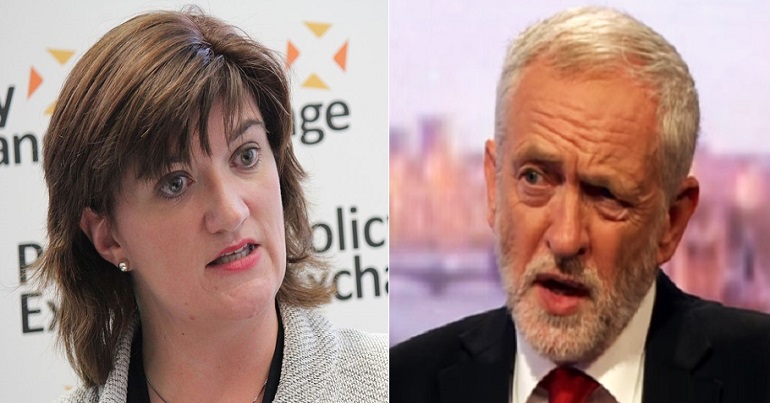 It’s only Monday morning, but the smears about Labour are already flowing from Conservative MPs. And former education secretary Nicky Morgan has come out with a bit of a big one.

Morgan was on BBC Radio 4 Today talking about student tuition fees. The Conservative MP for Loughborough was asked by presenter John Humphrys whether Labour’s policy of abolishing tuition fees and bringing back the maintenance grant would mean the Conservative Party would “struggle” to get “the youth vote”.

I think pretty soon after the election, as far as I can remember, Jeremy Corbyn and John McDonnell both said ‘oh well, we’re not sure we’re going to abolish it’.

Morgan then said Labour made its pledge to abolish tuition fees “in the heat of an election”. And there was more:

Tories now agree with us that we have one of the most expensive systems of university tuition in the world. We will abolish tuition fees, restore maintenance grants &introduce a national education service free at the point of use from cradle to the grave. Tories offer a review 🤔

Tuition fees are currently back in the news. The government has pledged a review into the loans after Theresa May admitted that students have “one of the most expensive systems of university tuition in the world”. As the Institute for Fiscal Studies found, the poorest students leave university with the most debt; that’s £57,000 compared to £42,000 for the richest students.

The current policy on tuition fees means that universities can charge up to £9,250 a year. Student loans have interest rates of up to 6.1%. Students begin to pay back the loan when they earn over £25,000. And the government writes off any unpaid debt after 30 years.

But although the policy was introduced by New Labour, it’s the Conservative Party that has come in for the most criticism, after David Cameron raised the fee limit from £3,000 to £9,000 a year. And the Tories may have paid for their financial hammering of students at the 2017 general election; because Labour increased its 18-to-24-year-old vote share to 60%.

What’s sauce for the goose…

But is it right that the Conservatives maintain one of the most expensive university systems in the developed world? As one Twitter user pointed out:

#TuitionFees
So let me get this straight, it's only proper that student's contribute to their education, what like you lot did…! @NickyMorgan01 on #BBCR4today
https://t.co/2iOP311IuK

Free education. Alright for some, but obviously not for others.