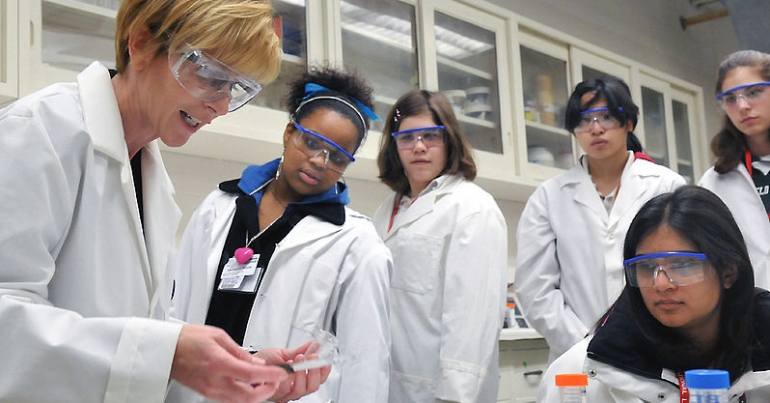 Finland, Iceland, Norway and Sweden stand out for their high levels of gender equality. Researchers examined the proportion of women studying science, technology, engineering and mathematics (STEM) in higher education in these countries. And what they discovered was a ‘gender equality paradox’.

The researchers, from Leeds Beckett University and the University of Missouri, found that countries such as Albania and Algeria – which don’t score very highly in terms of gender equality – have a higher proportion of female STEM graduates than the Scandinavian countries. They dubbed this a paradox, because you would expect to see the opposite.

To explain this surprising finding, the researchers point out that Albania and Algeria offer little welfare support – in contrast to the Scandinavian countries – which could make the option of a well paid, relatively secure job in STEM seem more attractive. In Norway and Sweden, on the other hand, factors such as personal academic strengths and interests play more of a role in educational and career decisions. Prof Gijsbert Stoet said that:

even though girls can match boys in terms of how well they do at science and mathematics in school, if those aren’t their best subjects and they are less interested in them, then they’re likely to choose to study something else.

Researchers stress that we need to reassess interventions that aim to increase the number of women in STEM. Stoet said:

It’s important to take into account that girls are choosing not to study STEM for what they feel are valid reasons, so campaigns that target all girls may be a waste of energy and resources. If governments want to increase women’s participation in STEM, a more effective strategy might be to target the girls who are clearly being ‘lost’ from the STEM pathway: those for whom science and maths are their best subjects and who enjoy it but still don’t choose it. If we can understand their motivations, then interventions can be designed to help them change their minds.

The role of sexism

The Nordic countries may have the highest levels of gender equality, but this doesn’t mean sexist attitudes have disappeared. A 2016 study by Stoet highlighted that parents in very gender equal countries are nonetheless more likely to value mathematical competence in their sons than their daughters. Mathematics anxiety is also higher for girls and women in these countries than it is for boys and men. This is anxiety about one’s ability and performance in mathematics.

In one experiment, researchers created a fake job application and sent identical copies to STEM professors across the US for evaluation. The only difference was the applicant’s name. Researchers found that these professors judged ‘Jennifer’ as less competent than ‘John’, even though it was the same application. While the US may score lower in gender equality than the Nordic countries, this implicit gender bias could still play a role in the ‘gender equality paradox’ that we see.

The surprising discovery of this ‘gender equality paradox’ will certainly reignite the debate about gender differences in interests and the role of sexism in society.