Despite this blatant evidence, the killer of a rare bird has got off scot-free [VIDEO] - Canary 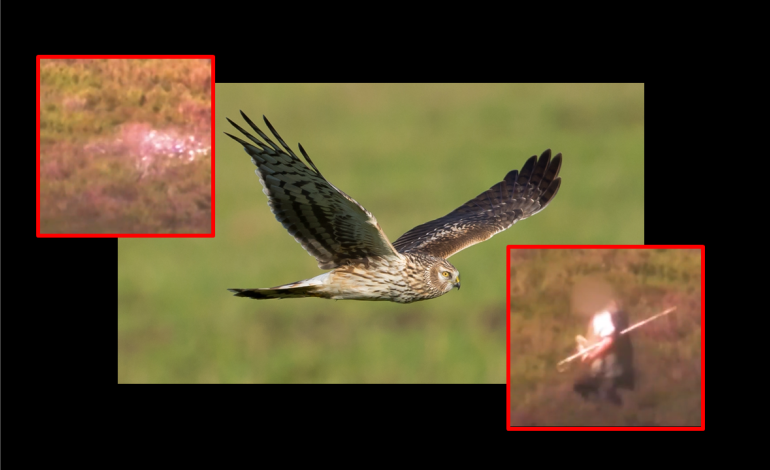 The evidence seems absolutely clear. On a remote Scottish moorland, an RSPB trail camera is monitoring the nest of one of Britain’s most endangered birds – a hen harrier. Suddenly, the female flies up from the nest in the bottom left of the picture. A split second later, there are two shots and an explosion of feathers. A man carrying a gun then walks across the screen and returns shortly after, carrying the body of a dead hen harrier. The man pauses briefly to collect a few fallen feathers, then walks away.

We do not agree with the opinion from the Crown Office that we were attempting to gather evidence for a prosecution. We installed a camera to monitor a protected breeding bird’s nest site, core business for a conservation organisation. We did not share the information about the nest site with anyone, as would be the case with any rare and vulnerable breeding bird species. The fact that an individual came and allegedly shot the female harrier, and that this was captured on film, was an incidental consequence of the camera’s deployment, in the same way that it could easily have captured footage of the nest being naturally predated or failing due to bad weather.

The government’s own research [pdf] on hen harriers demonstrates that there should be way more of them living in the UK than there are. It shows that the main factor keeping their numbers down is illegal persecution. It also confirms that the locations of persecution incidents strongly match to areas used for driven grouse shooting. As former RSPB conservation director Mark Avery says:

We know that this sort of thing happens, because the science tells us it does, but it is still shocking to see it with one’s own eyes.

And Avery continues, referring to the fact that harming birds of prey such as the hen harrier has been illegal since the 1954 Protection of Birds Act:

A 63-year experiment in hoping that grouse shooting will rid itself of criminality has failed.  Hen Harriers, Golden Eagles, Peregrine Falcons and other protected wildlife are routinely, systematically and illegally killed by grouse shooting interests across the UK.

The way our countryside is run in the UK is the product of centuries of privileged interests. Theresa May’s endorsement of fox hunting is proof that she too is completely in thrall to the landed set. David Cameron made it clear that he sided with the elite by nearly doubling subsidies for land used for grouse shooting. The SNP is failing to make much headway in Scotland, as demonstrated by this case, and it’s hard to see much improving while the UK as a whole is run by the Conservatives. Turfing them out might be a small step towards a better future for our wildlife.

– Read more on the Environment from The Canary.

– Ask the candidates in your constituency to support measures to tackle wildlife crime.