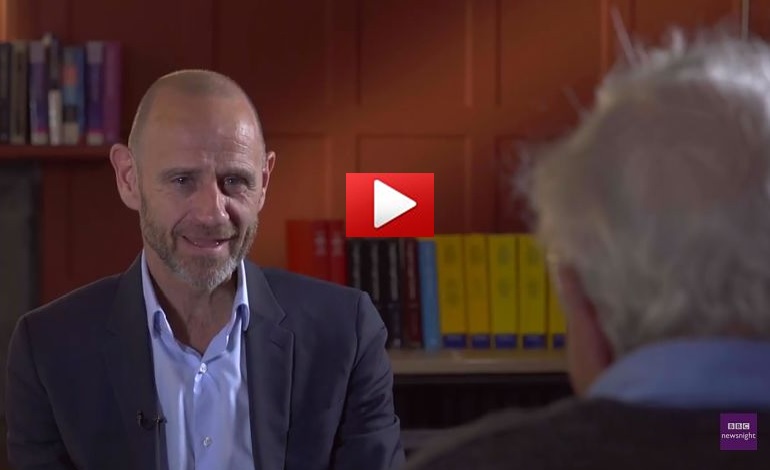 The BBC‘s Newsnight programme featured an interview with Noam Chomsky on 10 May. But the BBC didn’t air the entire chat between Chomsky and its presenter Evan Davis. And what it left out speaks volumes.

Chomsky gave Labour leader Jeremy Corbyn a striking endorsement in the broadcast interview. Davis asked if the renowned intellectual and political commentator had any advice or thoughts about how Labour can improve its chances in the general election. Chomsky replied:

They should ask me to vote. I would vote for them.

He continued, on Corbyn in particular:

I think he’s a very decent, good person. I’ve followed his career for some years.

Chomsky then went on to talk about why Corbyn, and his Labour Party, is “evidently not inspiring the population”. He noted how the Labour Party changed under Tony Blair, becoming essentially a “Thatcher-lite” outfit. And he said that, during this time, the party “did not represent the working class”.

But Chomsky also identified what he believes is in store for centrist politicians. And this comment, unsurprisingly, didn’t make it into Newsnight‘s final cut.

In the extended interview, Davis asks Chomsky whether the Labour Party needs to split after the election. He notes the divide between the ‘Thatcher-lite party’ and the ‘Corbyn party’. Chomsky acknowledged that there were divisions. And he asserted:

These are internal problems to these decaying centrist institutions.

So according to Chomsky, the notion that the Labour Party can survive as a ‘centrist’ institution is over. It’s essentially dead in the water. But the BBC didn’t broadcast that claim. And it’s not hard to see why. Because the BBC has continuously championed supposedly centrist politicians. It’s apparently a supporter of, and a believer in, such ideals. And it has attacked people like Corbyn, who are attempting to orientate the party in a “democratic socialist” direction; a principle that the party is supposed to be defined by.

And the media’s role in how the public views Corbyn was also missing from the BBC interview. Chomsky did, however, speak about this in an interview with The Guardian. He said Corbyn faced “bitter” hostility from the media. And speaking about Corbyn’s polling, he commented:

If he had a fair treatment from the media – that would make a big difference.

A vision for the working class

At the time of Chomsky’s Newsnight interview, Labour’s draft manifesto was unknown. He did say, however, that the neoliberal system and the so-called ‘centrists’ that rose from it, have carried out an “assault” on large parts of the populations of countries where they operate. And he noted the “anger” and “contempt” citizens feel as a result.

Now, someone has leaked Labour’s manifesto. And the document contains proposals that could rebalance society; in favour of the people rather than their ‘centrist’ neoliberal overlords. And here’s Chomsky insisting that the latter are part of a “decaying” system.

So no wonder the BBC didn’t want anyone to see Chomsky, arguably the world’s leading intellectual, say that out loud.