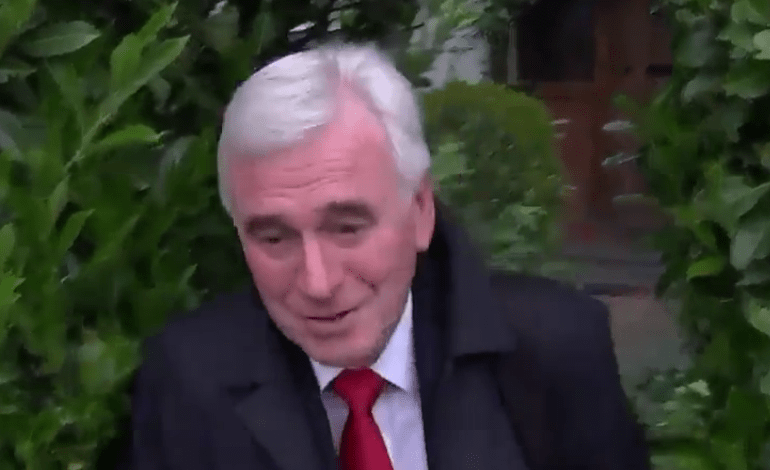 On 10 May, Labour’s draft manifesto was leaked to the press. So the following day, the BBC tried to ambush Shadow Chancellor John McDonnell. But it went badly wrong.

McDonnell, who was walking to catch a bus, ended up swatting the smears away like flies:

If you look at the energy proposals, they’re what a lot of modern European states have done over the last five years… In terms of railways… a lot of foreign countries now actually own our railway system. There are a lot of foreign companies who are then plowing those profits back into their own railway systems. It seems a bit odd that we’re subsidising German Deutsche Bahn, for example.

The draft manifesto proposals seek to bring energy and railways, among other public services, into community ownership.

On energy, Labour is looking at a scheme from Germany which would mean establishing [p6] regional energy suppliers that are democratically accountable and locally run.

On rail, the party wants to end a privatised system in which state-owned foreign companies like Deutsche Bahn (which owns Arriva UK Trains) extract profits from our railways. Rather than paying profit dividends to foreign taxpayers, Labour wants British taxpayers to benefit from their own national infrastructure.

Who was really caught off guard?

The BBC‘s approach, however, was apparently to carry on with a day of sneering disapproval. Political Editor Laura Kuenssberg was ridiculing the draft manifesto on Radio 4 earlier on, branding it a “wish list”. Then, a BBC reporter tried to catch McDonnell off guard:

Hahahaha!!! Classic @johnmcdonnellMP "lets walk along don't fall over" "I got to catch my bus" pic.twitter.com/zStxe7Mb7M

But the Shadow Chancellor shut the attempt down:

As McDonnell points out, profits from our railways are siphoned off to distant shareholders and foreign taxpayers. These can then cut back spending to increase profits. This comes at the expense of passengers and staff, but with no backlash whatsoever – because we need to travel.

So companies can essentially hold the country to ransom, leaving us paying huge subsidies to private and foreign state-owned corporations. McDonnell mentioned Deutsche Bahn-owned Arriva, which enjoyed a UK taxpayer handout of £349m in 2012. Among the other examples is First ScotRail (now Abellio ScotRail), which received a train subsidy of £525m the same year. Basically, we’re paying for our train tickets twice. And only rich shareholders and foreign taxpayers are benefiting.

While the Tories seem to be fine with this set-up, Labour’s manifesto seeks to end the rip-off economy of asset stripping. A system where British assets – like rail, mail and energy – have been sold off on the cheap and are then, because we still need to use these services, rented back at a far higher long-term price.

McDonnell launched a brilliant defence of the no-brainer that is public ownership of essential services on the BBC. And if we truly want to take back control, we must all keep kicking back against the propaganda of the establishment media.