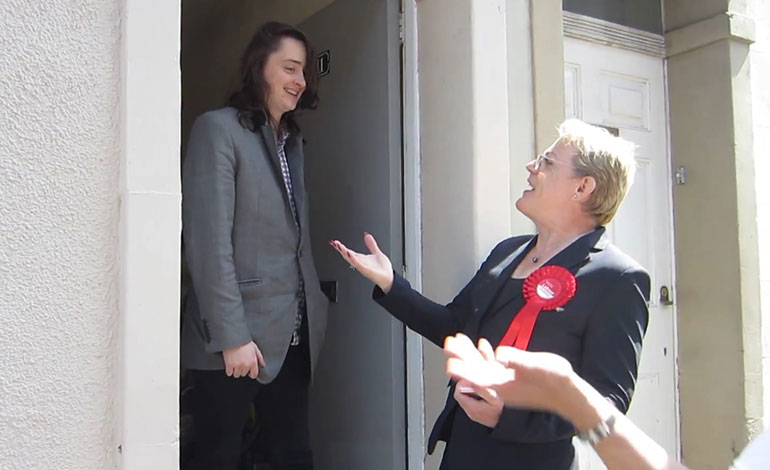 Izzard is a well-known political activist and supporter of the Labour Party. He’s often appeared on talk shows, including BBC Question Time. In these interviews, he’s discussed the EU, housing, immigration, and gender politics. In 2009 and 2015, he appeared in the party’s election videos.

In 2016, after running 27 marathons for charity, he announced he would eventually like to become an MP. Speaking to The Mirror, he said:

I want to get inside politics. It’s going to be Parliament. As an activist, you have 30% of the potential to get something done, but as a politician, you have 100%.

When asked about his political views, he added:

I want Labour to win. Jeremy [Corbyn] has got a good democratic wind in his sail, but we have to get to the centre of the country. I want to do what I can to help. I’m a fighter.

And fighting appears to be exactly what he’s doing.

Izzard has been talking to the public up and down the country. On 9 May, Izzard urged people to vote in Wolverhampton and Coventry. And on 10 May, Izzard was spotted in Cardiff and Bristol doing door-to-door canvassing. In Bristol, one local had the surprise of his life when he saw Izzard standing outside his door:

Izzard’s campaign trail has certainly caught the local media’s attention. But nationally, only The Sun picked up the story. And that was in an attempt to discredit the “leftie comedian”.

He’s far from the only celebrity to voice his political opinions, though. While some like Ken Loach and Charlotte Church are backing Labour, others like Jim Davidson and director Julian Fellows are strong supporters of the Conservative Party.

Most recently, a tweet from English journalist and broadcaster Caitlin Moran went viral:

The story was picked up by The Spectator, Yahoo News, The Daily Star, The Irish News, and The Belfast Telegraph.

Whether celebrity endorsements affect the decisions of voters is unclear. But what they do appear to do is drum up media attention and get people talking from all sides of the political spectrum. In 2015, 34% of voters did not vote. Taking into account those who didn’t vote, the Conservative Party received 24% of the vote, Labour received 20%, and the Liberal Democrats received 5.2%. If celebrities can do anything to encourage non-voters to vote, then we may be seeing a very different picture come 8 June.

Read more from The Canary about the upcoming election

Register by 22 May to vote