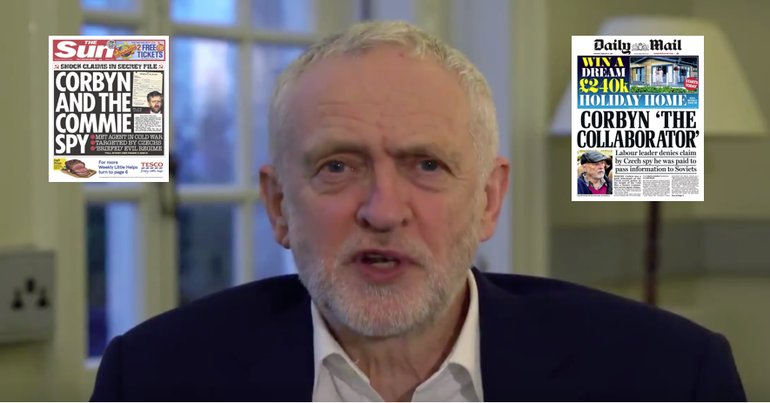 Jeremy Corbyn has sent a personal message to the billionaire, tax exile press barons of the UK’s establishment media: “Change is coming”.

Early in February, Jeremy Corbyn challenged Theresa May to publish her tax returns. The Labour leader published his voluntarily, revealing that he’d paid out nearly £50,000 in taxes during the last financial year. His argument was simple:

We cannot expect the public to trust us as party leaders, if we are not prepared to be open and honest about our own tax arrangements.

His move is consistent with his party’s 17-point plan to clamp down on tax avoidance. But unfortunately for Corbyn, around 80% of our media is owned by a handful of billionaires. And some of them really don’t like paying their taxes.

Jonathan Harmsworth, the fourth Viscount Rothermere, inherited The Daily Mail from his father through a Jersey trust and an offshore entity registered in Bermuda. Not happy with the benefits of these two tax havens, he had no qualms registering as a ‘non-dom’ to further reduce his tax liabilities. Meanwhile, a 1999 report found that Sun proprietor Rupert Murdoch had paid zero net tax on his UK holdings (The Sun, The Times etc) for the previous 11 years – despite making pre-tax profits of nearly £1.4bn.

With the May government lumbering from one disaster to the next, these tax-loathing tycoons face the real possibility of a Corbyn government. So… what to do? Let the bullshit fly in the hope some of it sticks.

And so, just days after Corbyn’s tax challenge, the right-wing lie-machine shifted into maximum gear. The Sun claimed to have evidence from the Czech communist archive that Corbyn collaborated with their agents in the 1980s. In case you’ve been hiding under a rock this last week, here is just how hysterical the front pages became.

In the 80s, Jeremy Corbyn was a backbencher for a party that was out of government. What would he have been able to pass to the USSR anyway? He wouldn’t have had the nuclear codes or access to classified data. And it’s doubtful that communist Russia was going to destroy Britain with the secret recipe for the House of Commons’ root vegetable stew.

The Czech agent who made these accusations also claimed to have been responsible for Live Aid. And he said that Czechoslovakia funded it.

As such, it came as little surprise when a Czech agency debunked The Sun‘s story. The agency’s statement was unambiguous:

Mr. Corbyn was neither registered [by the StB] as a collaborator, nor does this [his alleged collaboration] stem from archive documents

And yet the right-wing press has carried on regardless.

This isn’t just sloppy journalism. It’s a smear. And it’s dangerous. In June 2016, a right-wing fanatic brutally and publicly murdered Labour MP Jo Cox. His diet of right-wing propaganda was a motivating factor for his attack. We also now know that the Finsbury Park mosque attacker, another white supremacist, made plans to assassinate Jeremy Corbyn.

So not only is it right for Corbyn personally, but it is right for him on principle to defy the power of the press barons. In his message, he told them directly:

Publishing these ridiculous smears, that have been refuted by Czech officials, shows just how worried the media bosses are by the prospect of a Labour government. They’re right to be.

Labour will stand up to the powerful and corrupt, and take the side of the many, not the few.

The Labour leader drew a distinction between the importance of a free press and free rein for billionaires to manipulate public opinion with baseless propaganda:

A free press is essential for democracy. But we don’t want to close it down. We want to open it up. At the moment, much of our press isn’t very free at all. In fact, it’s controlled by billionaire tax exiles, who are determined to dodge paying their fair share for our vital public services.

The general election showed the media barons are losing their influence, and social media means their bad old habits are becoming less and less relevant. But instead of learning these lessons, they’re continuing to resort to lies and smears. Their readers – you, all of us – deserve so much better.

Well, we’ve got news for them. Change is coming.

It could also mean that the establishment media might lose its cosy system of self-regulation. New media outlets such as The Canary, Commonspace, and award-winning investigative outlet The Ferret have already signed up to the UK’s only truly independent regulator IMPRESS. IMPRESS is the only regulator compliant with the terms of the Leveson Inquiry into press standards. The establishment media continues to fund and manage its own regulator.

Just recently, Sun columnist Trevor Kavanagh was investigated by the ‘Independent Press Standards Organisation’ (IPSO) over a column which called for a solution to a ‘Muslim problem’. With its echoes of Nazi-era antisemitism, it was an open and shut case for most sensible people. But Kavanagh also happened to sit on the board of IPSO at the time of the complaint. And IPSO cleared him of any wrongdoing.

The establishment press has a lot to lose in the event of a Labour government. And the public have everything to gain.