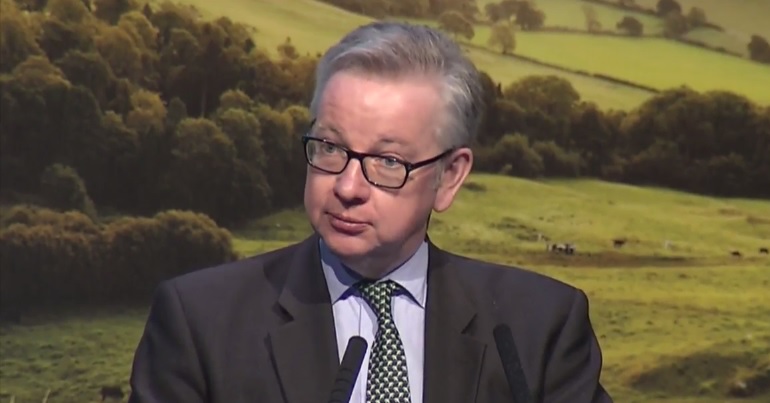 The Conservatives really, really want people to think they give a shit. Because after their death-by-policy spree in poor and vulnerable communtities over the last eight years, many citizens have begun to suspect they don’t.

That’s seemingly the impetus behind Environment Secretary Michael Gove’s latest animal welfare proposal. Well that and the fact that, under the current leadership, Labour clearly does give a shit. Compassion in World Farming described Labour’s animal welfare plan as “ground-breaking”. So in order to keep up with the Corbyns, Conservative ministers have to try and show that they have a heart too.

But Gove’s plan for improving animal welfare is as transparent as it is priceless. Really, you get no clearer picture of a Conservative minister than when they’re trying to convince you that they have compassion.

In your ‘capable’ hands

In a speech to the National Farmers Union annual conference, Gove laid out his plan for changes to farming funding after Brexit. He proposed paying farmers for the “public goods” they provide, such as maintaining the countryside. Gove also said that “investing in higher welfare standards” is important, and addressed how this “public good” could be encouraged post-Brexit:

We already, as everyone here knows, have a high baseline for animal health standards. And we’ll continue to enforce that. But we could also support industry-led initiatives to improve these standards, especially in cases where animal welfare remains at a legislative minimum.

It was clear from the beginning of that statement that Gove was going nowhere good. Because stuffing female pigs into cramped, inhumane farrowing crates and removing calves from their distressed mothers after just 24 hours of life isn’t a “high baseline”. So it was no surprise when the minister went on to say that his chosen elixir for making farmers treat animals humanely was, wait for it, self-regulation. Gove is planning to pay farmers to come up with their own “initiatives” on animal welfare.

The state of this

True to type, Gove is proposing a ‘small state’ approach to this issue. He plans to let farmers pronounce what standards are in the best interests of their animals. And UK taxpayers will foot the bill for that advice.

Labour’s approach is very different. Rather than settle with the “legislative miminum” that Gove appears content with, the party has laid out a 50-point plan for improvements to animal welfare which begins with a section on “strengthening animal welfare in UK law”.

It’s not hard to work out which of these plans is better for the animals they affect. To use a fitting analogy, you don’t put a fox in charge of a hen house. Because the fox (farmer) might prioritise its need for food (profit) over the welfare of the hens. And that’s especially true in Britain’s agribusiness “mega farms“. There are around 800 of these intensive factory farms currently operating in the UK.

So Gove can shove his faux sentimentality where the sun don’t shine. I don’t trust that he gives a toss about animals. Because his plan blatantly puts them at greater risk.

– Find out more with Compassion in World Farming.