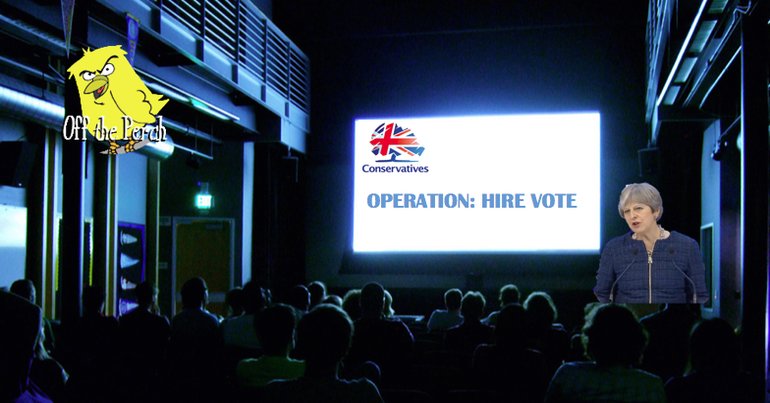 Ahead of forthcoming local elections, prime minister Theresa May today announced the Conservative Party’s new electoral strategy: ‘Operation: Hire Vote’. In the absence of grassroots support, the Conservatives will pay people £500 to cast a vote for the party.

Cutting out the middle man

The Conservatives are aiming to recruit three million people to join Operation: Hire Vote and vote Conservative at the next elections. Party officials believe this should counter the ever-increasing popularity of the Labour Party. The project is being funded by an offshore trust set up by disgraced retailer Philip Green.

The announcement came just days after the Conservatives unveiled their new social media strategy. Under those plans, the party will pay people to say positive things about Conservatism and the government, in the hopes of swaying public opinion. When unveiling the new electoral strategy today, the prime minister said:

Operation: Hire Vote owes much to the recently launched social media strategy. But it also makes it redundant. The zero-hours contracts of the 500 newly recruited social media czars will be transferred to the electoral strategy hub. No one will lose their non-job.

New Statesman journalist Philomena Pashmina asked the prime minister if she was aware that the plan breached electoral law. After a brief coughing fit, May replied:

The prime minister handed over to Figg Liefe, head of the Electoral Commission. The chief of Britain’s electoral watchdog appeared briefly from beneath Theresa May’s skirts. Off The Perch asked Mr Liefe if the commission was likely to censure the government for this gross breach of electoral law. When Liefe shook his head, the prime minister threw him a biscuit. After catching it, and receiving a short head rub from May, Mr Liefe once again retreated beneath the skirts.

Everyone who predicted that the Electoral Commission’s pathetic response to the Tory election fraud scandal would embolden the Conservatives was right. The Electoral Commission is a blind, deaf and toothless watchdog. This is banana republic level corruption, with our government literally buying votes to stay in power. And there isn’t a thing we can do about it. It’s beyond a joke.