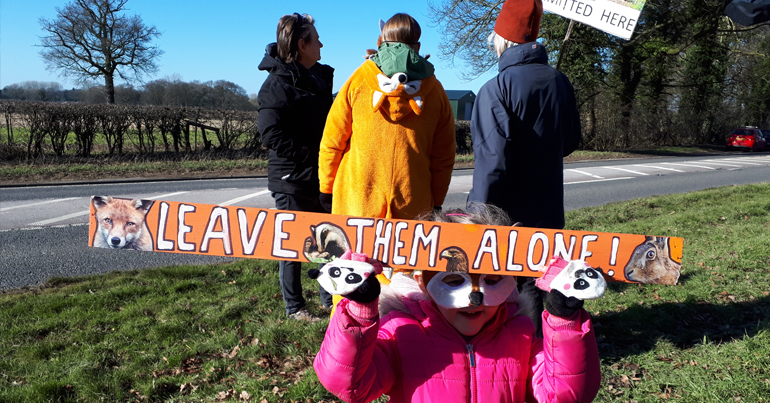 Protesters have told the National Trust to “stop the hunts” in demonstrations across the country on 25 February.

But groups such as the International Fund for Animal Welfare claim trail hunting is an “alibi against accusations of illegal hunting”; and that no genuine trails [pdf, p24] were laid in “99% of the 443 trail hunting events… observed”.

The vote result led National Trust member Helen Beynon, who put forward the motion, to tell The Guardian in October 2017:

It’s disgraceful, and the trust should be ashamed.

And anti-hunt anger has been amplified by the National Trust allegedly failing to keep to its pre-vote promise to monitor hunts more tightly. Chris Luffingham from the League Against Cruel Sports says:

The National Trust has let down its members by failing to regulate or monitor the hunts themselves and their decision to not publish the dates and locations where hunts are meeting makes it more difficult for independent monitors to track their activities to ensure any illegal hunting activity is reported to the police and punished.

But campaigners have kept up pressure on the National Trust to enforce a total ban on hunting, saying this is an issue that is “not going to go away”:

NT this is not going to go away, people will not get bored, we are passionate, we care. The question is do you?

Protests on 25 February happened across at least 17 National Trust locations. These were arranged through a call-out by anti-hunting group National Dis-Trust. And they saw members of the public come together with animal rights groups to raise awareness amongst visitors to National Trust sites.

Great day at Stoneywell NT with Notts and Leicester hunt monitors to remind the @nationaltrust that #AnimalAbuse is happening on their land @NT_Distrust pic.twitter.com/sozqNlKKkt

Speaking to The Canary, Beynon said:

Members email me that things are worse than they were before. They don’t know where or when they’ll come across hounds tearing a fox to pieces…

National Dis-Trust is not just a handful of people, but a voice for the many, many members and ex-members who rightly hold the Trust responsible for the shambles that, whatever the intention, results in cruel death for animals in their care. We are not going away. We will hold them to account.

On 16 February, the National Trust responded to the planning of these events, telling SomersetLive:

People have the legal right to organise demonstrations and express their views. We accept these protests on our land, provided they are respectful and do not interfere with conservation or access for our visitors

But Tim Bonner, chief executive of pro-hunting Countryside Alliance, attempted to ridicule one protester on Twitter by claiming support for animal rights is “a mental illness”:

A crime against nature? Tell me that animal rights isn't a mental illness pic.twitter.com/bxHEYidk9y

But he faced a barrage of mocking reactions:

What’s worse: dogs wearing a goofy outfit, or ones that look like this? pic.twitter.com/XzbAUpvkGB

Oh dear @CA_TimB , that sounds like ‘an own goal’.

This is an utterly crass and offensive comment, both in your contempt for those who look to uphold the law and protect wildlife, but also in your belittling of mental illness. I suggest you apologise and stand down.

I've seen people struggle with mental illness and it's not something to joke about, you're a very small minded person. You should but will not feel ashamed of that tweet.

The organiser of the demonstrations, National Dis-Trust, said:

The protests are just one of many actions planned to raise public awareness of illegal hunting on Trust land. The hunting season is now drawing to a close, and the Trust needs to take stock of their untenable situation. It is well past time that they recognise what is obvious to so many people and stop issuing these farcical licences.

– Support anti-hunting organisations such as the League Against Cruel Sports and Hunt Saboteurs Association.