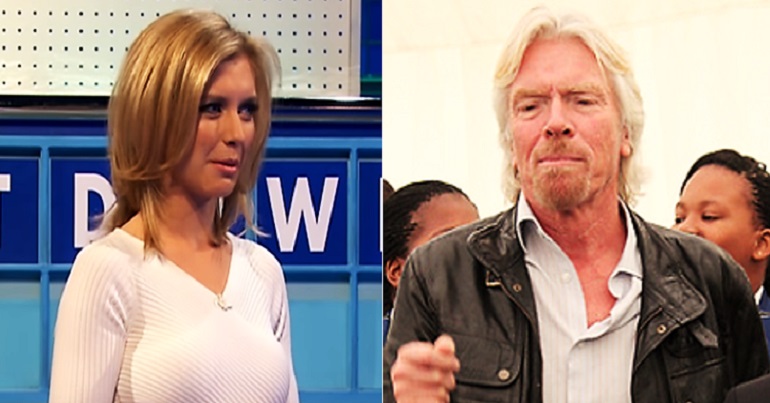 Countdown’s Rachel Riley is a bit of a mathematical genius. Did you know, though, that she’s also a rather skilled corporate giant slayer? Because on Sunday 25 February, she publicly exposed Virgin Trains’s treatment of a disabled passenger.

Riley was aboard a packed, football ‘match day’ Virgin service. After initially complaining on Twitter about the “disgusting” and “horrible” conditions on her train, she rounded on Richard Branson’s train company over the treatment of a disabled passenger:

. @VirginTrains I’m on the floor next to a disabled lady who had to be helped onto the train, had a paid for seat but unable to get to it as train so rammed. Had to perch on table. Disgusting

@Jmiragliotta89 @VirginTrains yep. Unf she, like me today & many others aren’t even going to the game! Insult to injury. Horrible isn’t it

on the same train and the disabled lady Rachel mentioned had booked wheelchair assistance at Stockport which wasn’t waiting for her either. Awful journey

And after social media responded, Riley found the experience wasn’t a one off. And she may have set the cat amongst the pigeons with Virgin and its passengers:

Wow! SO many messages today of similar experiences on @VirginTrains Here’re your rights and where to complain & request a refund https://t.co/7PtiTqOpZO pic.twitter.com/av98suY0ka

Is it just me or was it being slightly aloof…?

It's certainly not the experience we would like you to have and our team onboard will be doing all they can to ensure passengers are comfortable. If you'd like to make a complaint about this, you can do here https://t.co/owmU5EDQp4 ^AL

But Riley was having none of it:

Didn’t see your onboard team once. Neither did Diana Ross (yep) your uncomfortable, unhappy disabled passenger on her way to a doctor’s appointment, oblivious of the match and your matchday conditions https://t.co/SDCCYFs4IZ

The situation raises an important point, though: the accessibility, or lack thereof, for disabled people on our rail network.

Campaign groups like the Association of British Commuters (ABC), Disabled People Against Cuts (DPAC), and Transport for All (TfA) have been fighting for rail accessibility. They say that it is harder for disabled people to travel than non-disabled people.

Also, as The Canary has previously reported, disabled people have seen assistance at stations cut. So much so that one passenger had to drag himself on and off trains. In another example, the ABC believes that Southern Rail is in breach of the Equality Act 2010 regarding its scrapping of full disabled access at 33 stations.

So the campaigners have various demands of the government:

The lack of accessibility on our rail network begs the question: what century are we in? And why, in 2018, are people having to fight for their most basic of rights? The answer to that is, sadly, a fairly simple one. Because we have a privatised national rail service, those operating the network are more concerned with profit than passengers. As Riley and her fellow passenger’s case shows, train companies’ profit drive often leaves disabled people stuck.

– Support DPAC, Transport for All and the Mental Health Resistance Network.