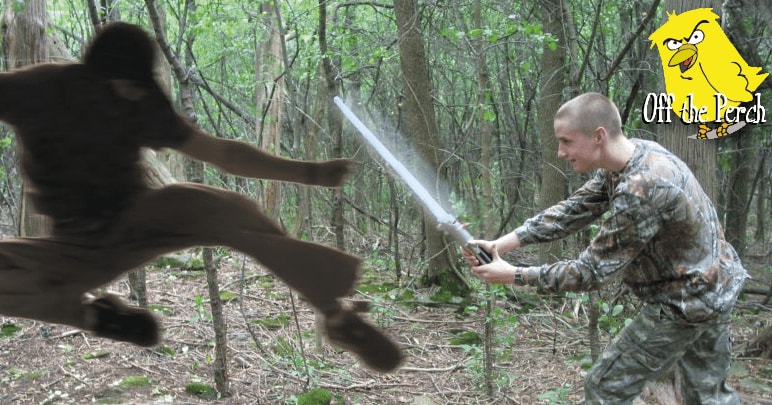 Tommy Robinson (pictured here punching an African gentleman in Italy) was recently ‘attacked’ outside a McDonald’s. Although some have suggested the video may in fact have been staged:

HAHAHAHAHA this is the video of Tommy Robinson being "attacked" by "antifa". do take a few minutes to watch this hilarious staged video, its like something off Eastenders. Absolute fucking gold. https://t.co/iAxRf37IgS

Not one to be embarrassed by others when he can do the job himself, Robinson released a video of a second ‘assault’.

Everybody was kung-fu fighting

In the new video, Robinson is walking out of a Kentucky Fried Chicken when several assailants come flying towards him.

“Ninjas!” Robinson shouts, although the attackers clearly seem to be dressed like the shaolin masters from Crouching Tiger, Hidden Dragon.

The ‘ninjas’ are visibly flying in on wires. A fact which becomes painfully apparent when one of the harnesses snags and the ‘ninja’ in question is left dangling like a deadly testicle.

Most people staging such a video would probably pretend to get beaten up in order to make their enemies look like the bad guys. Robinson’s ego is such that he had to get the upper hand though – even in a pretend video.

This is why Robinson was seen to ‘beat up’ his attackers as he shouted “so much for the tolerant left!”

Those pricks were as fast as lightning

Robinson dispatched the ‘ninjas’ who ran away shouting “Sharia law rules!” Robinson was then confronted by what appeared to be a rubbery bad guy from the 1990s show Power Rangers.

If you’re unfamiliar with George Soros, he’s a billionaire Jewish person whom many on the right think secretly controls the world. He isn’t actually a children’s TV bad guy, but you’d be forgiven for thinking otherwise if you run in Tommy Robinson’s circles.

Really, though, if these people are that bothered about ‘globalism’, they should probably think about this:

It's disappointing to see Tommy Robinson get beaten up outside a McDonald's. A true British patriot would get chinned outside a Beefeater's or a Little Chef.