New centrist parties argue over which is the most central - Canary 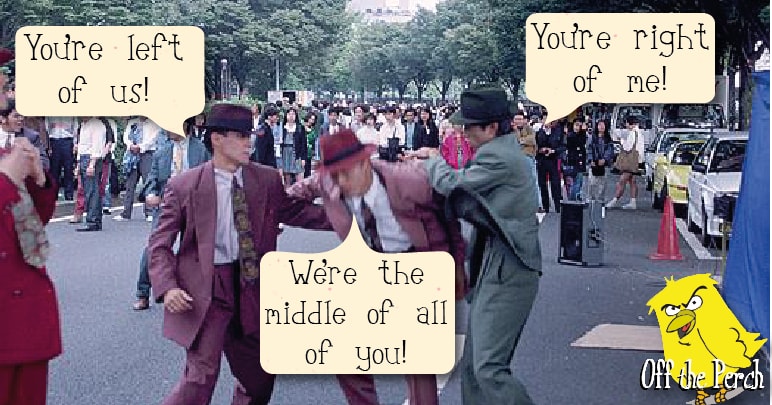 There are now more potential centrist parties than voters. The problem is that centrists define themselves by their distance from parties on the left and right of them. But the more parties there are, the harder it is to truly be at the ‘centre’.

As a result, an almighty brawl has erupted between the warring centrists.

By which we mean a tepid scuffle has farted out between bickering nobodies.

Stuck in the middle with them

The Liberal Democrats were formerly considered the centrist party of choice. They were considered ‘centrist’ because they espoused the social equality of the left and the fiscal inequality of the right – the latter making the former impossible, obviously.

There are now several parties even more vacuous than them, however. And as such, the Lib Dems are now considered ‘hard-left’ or ‘far-right’, depending on what beliefs they claim to have that day.

The leader of Nevolution – a mould-breaking party that vows to agree with celebrities for money – said today:

This country needs leadership! The sort of leadership that says maybe most people do deserve a worse quality of life! That says failed policies from successive failed governments probably are for the best! And that says talking about having fresh ideas is more important than actually having them!

As he finished his speech, the leader of rival centrist party Nomentum appeared. She accused her opponent of being a “left-wing extremist” because he once ate an organic yogurt. She also proceeded to show off her own centrist credentials by simultaneously smiling and existing in public.

Where will it continue?

After much more insipidness, rock band Status Quo became embroiled in the fight. It turned out they hadn’t formed a cutting-edge centrist party, though. ‘Status Quo’ just sounds like the sort of thing one would call itself.