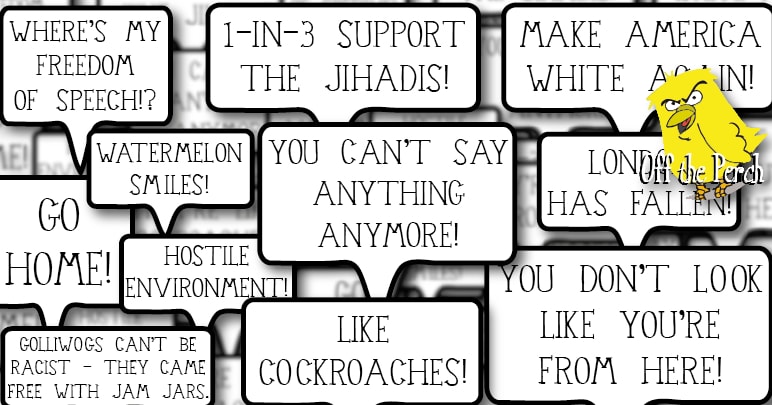 You can’t say anything these days. And you know that’s true, because people let you know what they can’t say just before they say it.

There’s a problem, however.

As the squawking of people saying things they can’t say is risking people’s eardrums.

A professor of paradoxical noise explained the situation to us:

Although it’s true people can’t say these things, that doesn’t mean they technically can’t say them. They can still, for example, speak freely on Twitter and Facebook; in the comment sections of websites; in the middle of angry mobs, etc.

It’s just they can’t say these bigoted things in public. Although, again, they often can. It’s just that they can’t say it without the risk of other people thinking they’re a backwards fuck-head. And even then, they’ll commonly find a receptive audience.

Some people have argued we should debate these bigots, as that’s the only way their bullshit philosophy will be beaten.

Professor Doc Brown and his buddy Marty McFly explained how this works in practice:

They need to debate them, Marty! We’ve been to the future! In 2016, Donald Trump runs for President! But he’s denied the White House as a result of his arguments being rigorously dismantled across several TV debates!

Great Scott, Marty! Look at this newspaper! It says Trump is the President! We’ve landed in the wrong time-stream again!

It was explained that although Trump was debated into the ground by several opponents, he still won. Almost like the ‘public debate will win the day’ strategy doesn’t work in our dimension – because we don’t live in a 19th century novel.

Until this period of silencing bigots ends, you might want to get yourself some earplugs. Because the sound of their ‘silence’ is deafening.