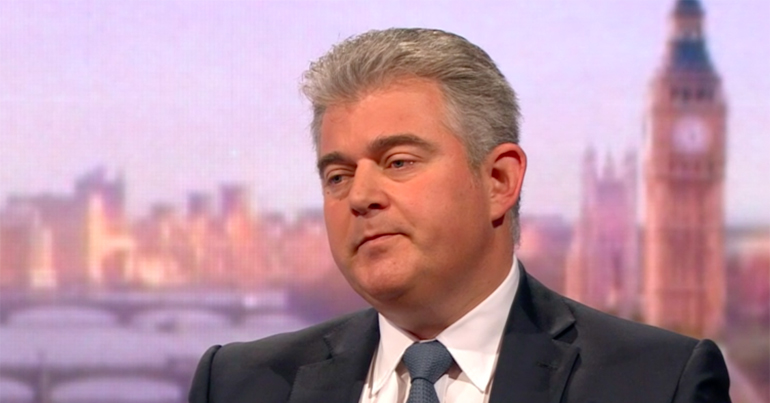 In an effort to defend Amber Rudd, Conservative party chairman Brandon Lewis dug his old boss into an even deeper hole.

In an interview on the BBC‘s Andrew Marr Show, Lewis attempted some damage control for the besieged home secretary. He said that she had not misled the home affairs committee when she said that there were no deportation targets.

His argument, however, didn’t stand up to scrutiny.

Lewis, who previously served as Rudd’s deputy, argued that when she stated “we don’t have targets for removals” she was referring to the key performance indicators (KPIs) and not general deportation targets. Specifically, Lewis stated that:

… if you look at the question… she was asked, she was being asked about the localised regional internal, effectively the KPIs [key performance indicators] the immigration enforcement agency was using, and no she was not aware of that.

So according to Lewis, Rudd was being asked specifically about KPI’s when she stated that the Home Office didn’t have targets for removals.

Unfortunately for Lewis and Rudd, Yvette Cooper, who acted as the home affairs committee chair during Rudd’s infamous grilling, was having none of it. She tweeted the following:

Well this is clearly not true. https://t.co/4RTgj5K0sz

The minutes confirm that a question on KPI’s was indeed raised. However, the same minutes and video of the meeting confirm that Rudd was answering a general question about deportation targets not KPI’s when she gave the answer in question.

Chair (Cooper): Targets for removals. When were they set?

Amber Rudd: We do not have targets for removals.

It seems that the claims by Lewis do not hold up when confronted with the evidence.

Lewis didn’t just offer this flimsy defence of Rudd either. He had a few more tactics which distracted from the real issue too.

During the interview, Lewis attempted to draw a distinction between a “target” and an “ambition”. When Marr asked him about the Home Office’s goal to deport 10% more illegal immigrants than in previous years, Lewis said this was an “ambition“. And he confirmed that Rudd was well aware of this 10% target (or ‘ambition’, as Lewis would say).

Marr followed up by asking:

So the defence of the Home Secretary is that this is an ambition, not a target?

To which Lewis responded:

Well actually, there’s a big difference between the two things.

Viewers were, however, quick to point out the difference between a target and an ambition is negligible:

Tory party chairman Brandon Lewis confirms that he talked to Amber Rudd about her ambition to increase enforced removals by 10% but denies telling her about specific internal targets. Now trying to split the difference between "an ambition" and "a target".

This govt seems to continue to get away with anything & avoid accountability, simply by playing gymnastics with language & manipulating semantics.

Beneath the spin, he let the truth slip and sealed her fate. Amber Rudd knew of the targets she pretended didn’t exist.

In an effort to contain the fallout of the Windrush scandal, the Conservative party appears to be relying on increasingly desperate methods of damage control. Unfortunately for Rudd, these efforts only seem to be digging her into a deeper hole.