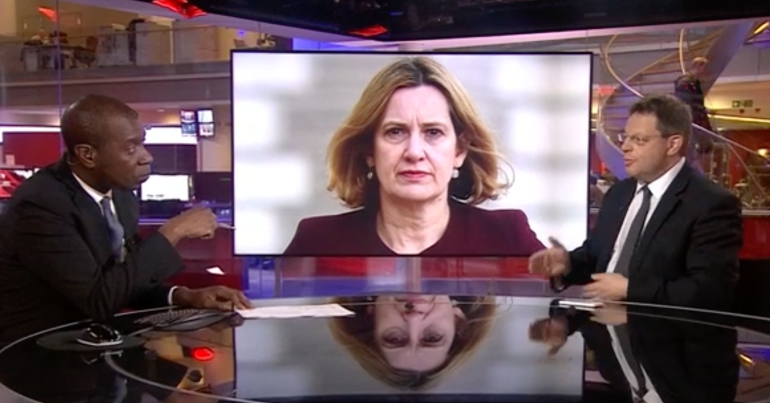 Amber Rudd has resigned. After weeks of pressure over the Windrush scandal and her misleading parliament on deportation targets, she has finally gone.

But the response from the BBC was gobsmacking. Speaking about the resignation on BBC Weekend News, anchor Clive Myrie stated:

This, obviously a devastating tragedy for Amber Rudd and for the government in general.

Yes… First of all for Amber Rudd personally about her own reputation.

People quickly took to Twitter to address the comments:

BBC News at 10pm tonight: presenter says: “Obviously this is a tragedy for Amber Rudd”. TRAGEDY FOR Amber Rudd – what about the tragedy and detrimental effect for the victims of these despicable actions. The BBC manages the change the emphasis yet again. Poor Amber!

Appauling comment by the BBC. It is a tragedy for those affected by Windrush, and the hostile environment regarding immigration by the home office. Mrs May set up this tragedy, Mrs Rudd carried out Mrs May's policy directives. Neither of them are risking being deported.

BBC presenter seriously describing Amber Rudd’s resignation as a ‘devastating tragedy’ for her…..

What about the devastation and tragedy her and the Home Office have imposed upon innocent people such as the #WindrushGeneration??

Get a grip BBC.

Others pointed out exactly why this isn’t a “tragedy”:

BBC News describe Amber Rudd's resignation as a 'Devastating Tragedy' She has been found out as a liar, not diagnosed with terminal cancer.Yet more biased reporting from the BBC.

BBC called this "a tragedy for Amber Rudd"

Losing your job (and she's still an MP, not like she's on the streets) because you repeatedly lied is not a tragedy. It's justice. Being deported from your own country by a racist government is a tragedy. #ToriesOut #AmberRudd #BBC

As these Twitter users pointed out, Rudd’s resignation was not a “tragedy”. But the suffering that the Home Office policies have caused, under Rudd and before her Theresa May, is a tragedy. From the Windrush generation to the women who’ve been on hunger strike in Yarl’s Wood, and to anyone threatened by the racist ‘go home’ vans, these policies have spread misery across the country.

It’s also a tragedy that the UN has found there is “structural racism” in the UK due to the number of Black Asian and Minority Ethnic people who have died after contact with the police. Another tragedy which lies directly at the door of the Home Office.

And while Rudd’s resignation is welcome, it is a tragedy that the architect of the policies, May, is still in power. Because the blame for the scandal lies directly at her feet and with the “really hostile environment” she wanted to create for immigrants in the UK.

There is nothing tragic about Rudd resigning. And serious questions need to be asked of the BBC when it thinks it’s acceptable to change the narrative in this way.