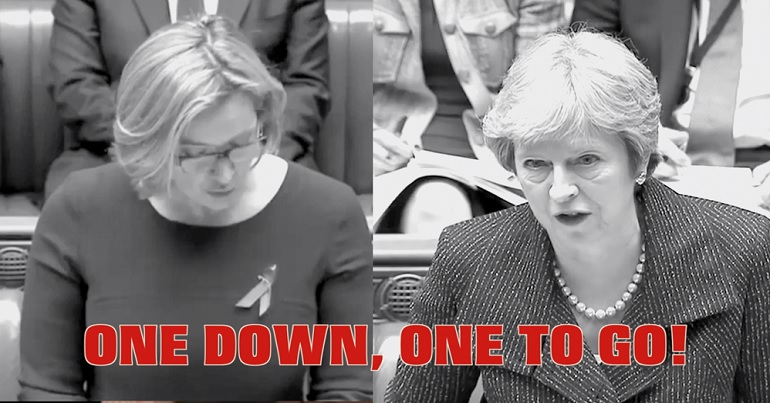 The band behind last summer’s top five hit Liar Liar has released a protest song over the Windrush scandal. Keeping pace with the news, the video says “one down, one to go” and calls on Theresa May to follow in Amber Rudd’s footsteps and resign.

A group of musicians formed Captain SKA in 2010. These included the band’s frontman Jake Painter. He told The Canary that he started the band in 2010 because he was “horrified about the austerity measures being brought in by the coalition government, and equally appalled at the lack of musical response”. The band shot to prominence after its protest song about May, Liar Liar GE2017, reached number four in the music charts, even though many radio stations refused to play it.

But now, Captain SKA has turned its attention to the Windrush scandal.

It’s released a track called The Windrush. With vocals from dancehall artist Rubi Dan and a guest appearance by Rudd herself, it’s a short but to the point masterclass in ska-based protest music:

Painter told The Canary that the band had been watching the Windrush scandal unfold for “quite some time, with a growing degree of anger”. So it decided to do something about it, and The Windrush came together almost overnight. The track is an upbeat, defiant call to action over the scandal; something Painter said was intentional:

It’s genuinely such a depressing topic we wanted something that was defiant and highly charged. And something to get the message out there.

The Windrush scandal is another outrage in a long line of Conservative-led travesties. From the homelessness crisis to UN reports condemning human rights violations against disabled people, the Conservative Party has presided over outrage after outrage. Painter told The Canary that the public must continue to apply pressure to the government “from every angle”:

Obviously, if we can make sure that they get a bad result in the local elections that will help. But I think the public is reaching breaking point. Sooner or later, something has to give. It’s a national scandal. We all need to be getting out there, going on protests, making music, making noise, and above all making sure we vote in the local elections.

The Windrush scandal has dogged the government of late. As The Canary‘s Chris Jarvis previously reported:

The government is on the back foot over the Windrush scandal. Commonwealth migrants who arrived in the UK up to 70 years ago, have had benefits stripped and been refused healthcare, employment or housing. As a result one woman, who moved to the UK in 1968, was detained and faced deportation.

So, Rudd has gone. But it was actually May who made the changes to law which led to the Windrush scandal. It was part of her flagship policy to create a “really hostile environment for illegal migrants”. Rudd may have fallen on her sword for the PM, but as Captain SKA says, “one down, one to go”.

It’s time to put this zombie government out of its misery. May must now resign, too – and a general election must follow.

– Buy The Windrush on bandcamp; Captain SKA will release the track on other platforms on 1 May.