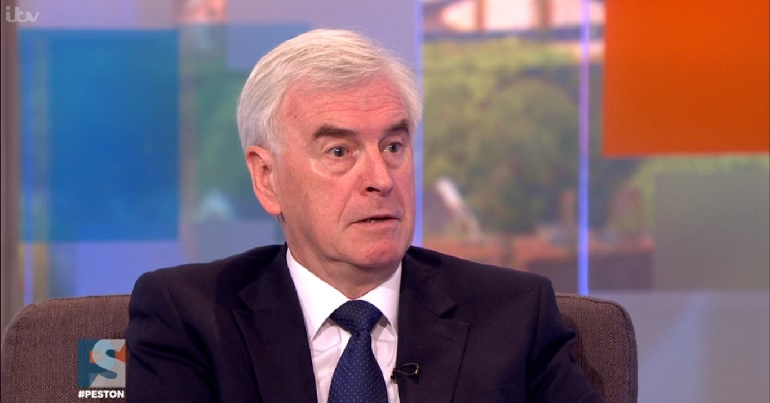 The government is on the back foot over the Windrush scandal. Commonwealth migrants who arrived in the UK up to 70 years ago, have had benefits stripped and been refused healthcare, employment or housing. As a result one woman, who moved to the UK in 1968, was detained and faced deportation.

Rudd has faced particular scrutiny for her role in the affair. Despite apologising for the treatment of the Windrush generation, a leaked memo showed her boasting about increasing the number of people deported from the UK.

In response, McDonnell attacked the government and slammed the treatment of migrants since the Conservatives first took power in 2010:

“It was an appalling environment” @johnmcdonnellMP says during the same period as the ‘Go Home vans’, the government was planning to instruct headteachers to check whether pupils had right immigration status and if they did not, to deny them access to schools. #Peston pic.twitter.com/eygtVf1tDY

He then went further, and called for Amber Rudd to resign:

He'd like to see @theresa_may resign too, but the Home Secretary @AmberRuddHR "should go" over the Windrush scandal, according to @johnmcdonnellMP #Peston pic.twitter.com/hvqmOmMTAJ

Similar calls were made by Ian Blackford, the Scottish National Party’s Westminster leader, and Labour’s shadow foreign secretary Emily Thornberry. Jeremy Corbyn also spoke of “something rotten at the heart of Government” in his criticism of the scandal.

McDonnell wasn’t alone. The public immediately took to Twitter to support him:

Other Twitter users argued Amber Rudd’s resignation wouldn’t be enough. They called for Theresa May to go as well:

Dear British Media. The public is not calling on just Amber Rudd to resign but also Theresa May who is responsible as PM and Home Secretary. @SkyNews @BBCNews #Marr #Peston Something rotten at the heart of government

The Windrush scandal is due to changes made to immigration law in 2014, when May was home secretary. John McDonnell was one of just 18 MPs (including the ‘tellers’) who voted against the changes. He was also joined by Diane Abbott and Green Party co-leader Caroline Lucas.

The removal of the Windrush generation’s rights was part of May’s flagship policy to create a “really hostile environment for illegal migrants” Policies she introduced included driving vans around London which told undocumented migrants to “Go Home” as well as requiring landlords to check tenants migration status.

Government policy on migration is unravelling. And with the blame resting right at the top of the government, this could be its undoing.

– Sign the petition calling for Amber Rudd to resign.

– Sign the petition calling for amnesty for Windrush migrants.