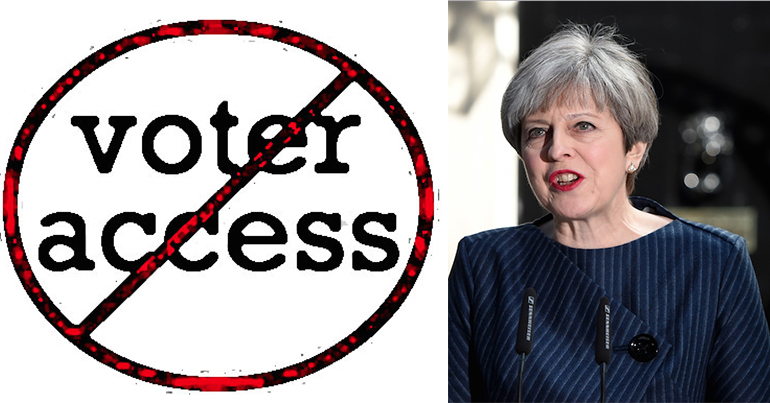 Theresa May has apologised to the Windrush generation. But the Conservative Party now risks alienating voters even further in an election trial that has been labelled “deeply racist” on Twitter.

In the local elections on 3 May, voters in five local authorities will have to show ID in order to vote.

A group consisting of campaign groups and academics have warned the government that these plans risk disenfranchising large numbers of people. Cat Smith, Labour’s shadow minister for voter engagement, sees it as “putting extra hurdles in the way” of a high voter turnout.

Social media users were clear about how they felt and drew parallels with Windrush and Trump:

Tories borrowing from the Trump play;list in a trial due at several polling stations in May – demanding identification before allowing people to vote. Passport one of the docs acceptable – so another dig at the Windrush victims.

The Government is bringing in new Voter ID laws that will require people to produce a valid photo ID, such as a passport, before they can vote. Evidence of voter fraud is so minimal that it is negligible. Voter ID rules only serve to further disenfranchise communities #Windrush pic.twitter.com/1fuZ24tWki

The Equality and Human Rights Commission (EHRC) is worried the plan will prevent people from voting. Its legal officer, Claire Collier, believes this trial:

will have a disproportionate impact on voters with protected characteristics, particularly older people, transgender people, people with disabilities and/or those from ethnic minority communities.

Who this plan can affect

Fraud in English elections has not been a significant problem to date. In fact, a study by the Electoral Commission found just 28 allegations [pdf, p14] of ‘voter impersonation’ at a polling station in 2017 – down from 45 in 2016. This is despite almost 45 million votes being cast.

People need to feel encouraged to vote. This pilot programme will not have that effect. So those favouring the government plan need to park their anti-Labour rhetoric and focus on statistics that suggest [pdf, p18] 14.5 million people could be excluded if these plans are fully rolled out.

Why the Tory plan is wrong

The trial announced in September 2017 would be troubling at any time, but it’s even more concerning in light of the Windrush scandal. The ‘hostile environment’ created by Theresa May makes the insistence on voter ID even more scandalous.

While it’s good to see outrage on social media, the real test for the Tories will be at the election. After all, it’s the voters who will be able to deliver the real verdict on the Conservative government