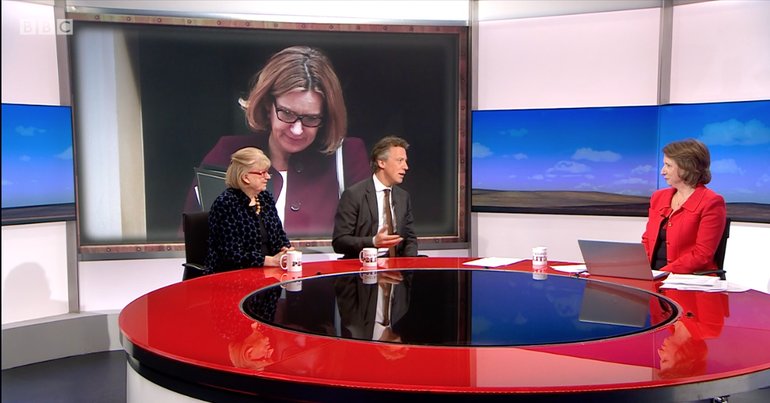 In the wake of home secretary Amber Rudd’s resignation, BBC Daily Politics ran a segment on next steps today. The BBC invited on Guardian columnist Polly Toynbee and Sun political editor Tom Newton Dunn as the experts. But an aside from Newton Dunn gave an accidental insight into just how much he cares about the Windrush crisis. Spoiler alert: not at all.

Host Jo Coburn asked the pair if Theresa May was in trouble now Rudd was no longer in place. And in a quite astonishing moment of accidental truth-telling, Newton Dunn replied:

I think she’s reasonably well insulated by this, you know. The witch hunt has got…

Panicked, he stopped himself and stuttered for a few moments before slamming into reverse gear. He continued:

Not witch hunt. Sorry. The pursuit of the really important story, I should say, has got its scalp.

It appeared that Newton Dunn momentarily forgot he was on live television, and gave his actual view. On realising his gaffe, he tried and failed to cover it.

@TheMendozaWoman every now and then, the mask slips… Today's daily politics…. pic.twitter.com/73ISaui1VS

The origin of the scandal

This scandal was not an accident. It was the intended result of the government’s immigration policy, and enabled by Theresa May herself.

But Labour centrists share responsibility for the crisis too, because Ed Miliband’s Labour front bench ordered MPs to back it. Yvette Cooper, Sadiq Khan, Chuka Umunna, and other prominent centrists were all party to this as frontbenchers at the time. While MPs across the House queue up to denounce the policy now, just 18 of them voted against the final reading of the act (including the ‘tellers’, who aren’t counted in the final vote). They were:

Not a single Labour centrist voted against the legislation.

The fight for fairness

This is a shameful episode, and the responsibility for it lies firmly at the prime minister’s door.

Her pandering to bogus immigration targets led to a ‘hostile environment’ for people contributing to our country. It led to British citizens being denied NHS treatment, losing their jobs, homes, and pensions, thrown into detention centres like criminals and even deported. Vital historical records shredded and ministers blaming officials…

Isn’t the truth… that, under her, the home office became heartless and hopeless?

And doesn’t she now run a government that is both callous and incompetent?

Labour MP David Lammy has also been front and centre in chasing down cases, in efforts to prevent deportations and ensure access to NHS treatments.

This scandal shows the true price of right-wing politics, and Labour centrism. Women, men and children across the country (and the world) paid the price when Labour centrists caved in to the right on immigration, war and the economy. The left is far from perfect, because it is merely a collection of imperfect human beings. But as with so many issues of late, the left was on the right side of history when it came to the immigration bill. And the centrists once again joined the right… on the wrong side.