A Sky News presenter just tried to mock Diane Abbott to her face. She tore him apart. - Canary 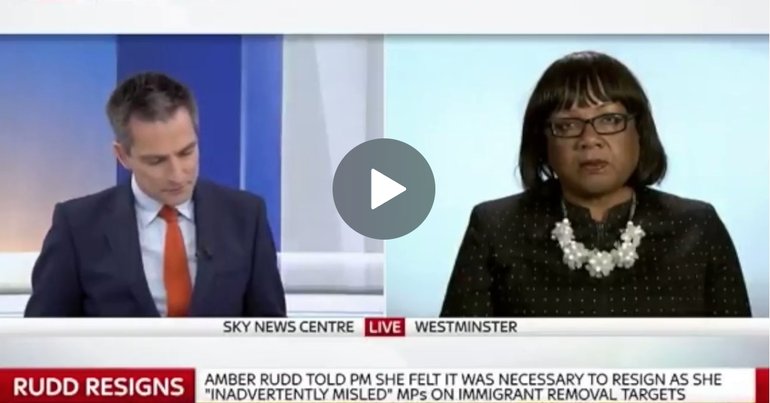 Labour MP and shadow home secretary Diane Abbott was Britain’s first black woman in the House of Commons. 31 years later, she remains the single most abused member of parliament. So when a Sky News presenter tried to mock her to her face live on air, she made sure he regretted it.

Diane Abbott is not a newcomer to the Windrush scandal. Like just 17 other MPs in the House, Abbott opposed the 2014 Immigration Act that made it possible. The same cannot be said of Labour centrists like Yvette Cooper, who called the act “sensible” and ensured Labour MPs didn’t block it.

But four years on, it is Abbott and the left who’ve been proven sadly right about the implications of the Immigration Act. Theresa May’s act undid the rights of the Windrush generation. People who’ve lived and worked in Britain for more than half a century have lost their jobs, been denied life-saving treatment from the NHS, been locked up in detention centres, and even been threatened with deportation.

But it wasn’t the scandal that toppled Amber Rudd. Instead, it was her apparent ignorance or denial of Home Office deportation targets. So instead of congratulating Abbott on ousting Rudd, Sky News presenter Jonathan Samuels tried to use this as a rod with which to beat her.

During the 2017 general election, Abbott suffered a diabetic episode during an interview about police numbers. Despite the cause of Abbott’s under-performance in the interview, the media went after her regardless. A year later, Samuels attempted to draw a parallel between that one bad interview and deporting thousands of citizens. It did not go well for him.

It is difficult to be across all aspects of your department – especially a huge department like the Home Office. Um… You yourself haven’t always, er, been completely clear on police numbers, for example.

To which she replied:

All the while, she was wearing a face which said simply: ‘you need to get up earlier in the morning to mess with me, sir’.

Well done @HackneyAbbott putting Tory spokesman (part time Sky presenter) Jonathan Samuels in his place. Diane got one figure wrong in one interview a year ago. Rudd and May responsible for the wrong deportation of hundreds of British citizens. Media need to end bias to Diane pic.twitter.com/KPOXcuDpgW

And others backed Abbott against a hostile media too.

Anyone else feeling uneasy at the sight of Yvette Cooper, who despite her recent interventions did not oppose the legislation which made #WindrushScandal possible, getting held up as the saviour, while Diane Abbott, who has opposed it throughout, and David Lammy are airbrushed?

One thing is clear: if Diane Abbott wasn't Shadow Home Secretary then Amber Rudd would still be in office.

A Labour Shadow Home Secretary who had supported the 2014 Immigration Act would have been hampered in pursuing the Gov't over its cruel policies.

The media might want to condemn Abbott for one bad interview. But she’s spent over 30 years in parliament being right about a whole lot else.