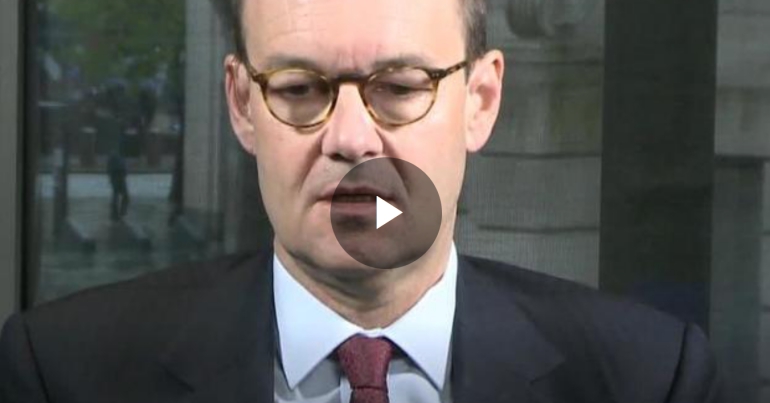 Sainsbury’s CEO Mike Coupe was caught out expressing his true feelings about his company’s proposed merger with ASDA. And it’s both embarrassing and utterly appalling in equal measure.

Coupe was in the ITV studios waiting for an interview. But when he decided to start singing, he had no idea that the camera was on:

Watch Sainsbury's CEO sing "we're in the money" while waiting to talk about the £12 billion merger with Asda – he's since apologised for his "unguarded moment" https://t.co/Kuaowz0q1u pic.twitter.com/jYMngcahS2

“We’re in the money”

The proposed merger between Sainsbury’s and ASDA is worth £13bn. Since the announcement, share prices in Sainsbury’s soared by up to 20% in early trading and “closed 14.5% higher”. So for Coupe, his ditty was apt.

But his optimism will not be shared by many workers. Tim Roache, the general secretary of the GMB union, stated:

What on earth will Asda workers who are worrying about their futures think when they see this? It’s not only crass, it’s completely unprofessional and utterly insensitive. Is Sainsbury’s takeover of ASDA about people – workers and shoppers – or just more profit for its boss?

And this was a view echoed by other people on Twitter:

Yes, people like him will be 'in the money' while staff will be cut, forced to endure worsening conditions and suppliers will be squeezed in order so that those at the top and its shareholders can be 'in the money' https://t.co/rLyeAxcmmj

Another group which is likely to lose out through the merger are small suppliers:

Sainsbury's CEO is singing "We're in the money."
UK farmers may be feeling less delighted about the prospect of Walmart's ruthless pricing practices being unleashed on them, on top of the severe impact of #Brexit.https://t.co/uzz36l1kC4

Walmart, the largest private employer in the US and the owner of ASDA, will reportedly retain a significant role after the proposed merger. Critics have previously given Walmart the title of “worst company in America”.

Coupe subsequently apologised for his singing. But this isn’t enough. His actions show utter contempt for workers and suppliers. People are worried about their jobs and their livelihoods as part of this merger. And Coupe’s actions will only make them feel worse.