The Tories would prefer we forgot about workers’ rights this May Day. But McDonald’s workers will not be ignored. - Canary 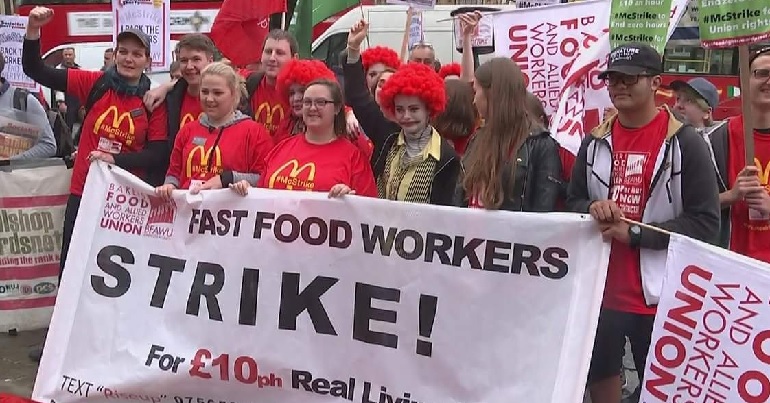 1 May isn’t a UK bank holiday this year. But workers are making sure that McDonald’s can’t ignore workers’ rights. And in a world where the ruling Conservatives would love us to forget the meaning behind International Workers’ Day, the #McStrike is exactly what we need.

This International Workers’ Day, McDonald’s staff will be striking for £10 an hour, guaranteed hours, and respect for their right to unionise. Five restaurants will reportedly be on strike in Manchester, Cambridge and London:

Join us tomorrow in #Watford, the home town of McDonald's Global CEO @SteveEasterbrk to demand a wage we can live on! #McStrike pic.twitter.com/jorxlO5JNh

McDonald's workers are on strike again.

The strikers are calling for a living wage of £10ph, an end to discriminatory youth rates in McDonalds, an end to zero hours contracts and union recognition.

Since a separate strike in 2017, McDonald’s has offered its UK staff a choice of fixed-hour contracts or “flexible” zero-hour ones. It has also increased staff pay, in the “biggest pay rise in a decade”. But in many cases, it wasn’t the living wage that workers were asking for.

There has been particular focus recently on McDonald’s CEO Steve Easterbrook reportedly earning £5,500 an hour – around 1,300 times more than what ­ordinary workers earn. McDonald’s has also faced accusations of tax avoidance in the past, among other criticisms.

Why the 1 May #McStrike is so important

In March 2018, grassroots campaign group Momentum highlighted just why the McDonald’s workers’ fight is so important:

We’re not just fighting for ourselves, it’s for everybody. No one who’s working hard should be worried sick about money every day.

In 2016, Jeremy Corbyn’s Labour Party decided not to allow McDonald’s to have a display at its conference because of the fast-food giant’s poor record on recognising trade unions and its “reputation for zero-hours contracts“. And in 2017, Corbyn asked prime minister Theresa May if she supported the campaign for “an end to zero hours contracts, and decent pay” at McDonald’s. She dodged the question.

Solidarity has also come from shadow chancellor John McDonnell, who recently supported fundraising efforts for the McStrike and has supported McDonald’s workers on numerous previous occasions.

Even when the UK first introduced the May Day bank holiday in the 1970s, politicians often avoided linking it directly to International Workers’ Day. And while many countries celebrate on 1 May – commemorating in large part the fight for increased workers’ rights, Britain’s government rarely mentions [pdf] International Workers’ Day. Instead, we have the first Monday in May off, for what the government calls “Early May bank holiday”.

The Conservative-led government even considered scrapping the May Day holiday in 2011. One proposal was to swap May Day with a “Britain Day” in October. Probably due to popular opposition, this didn’t happen.

Now, the McStrike is helping to ensure that 1 May truly commemorates workers who have fought (and died) for greater workers’ rights.

UK unions have already shown their support for the McStrike:

PCS are encouraging our reps and members to support the #McStrike on Tuesday 1 May in Manchester. Details of pickets and further information about how to support their campaign can be found here: https://t.co/LcPEhoHIYM #FastFoodRights #Solidarity @bfawu1 @IanBFAWU @Ronniebfawu pic.twitter.com/LMODNSJsAr

We support the McDonalds workers in @bfawu1 who are fighting for a fair deal at work & forced into action on 1st May (International Workers Day) #McStrikehttps://t.co/bbuw0FkCxQ

Tomorrow at 12:00 on Northumberland Street in Newcastle:

✊ #NSSN supporters converge on @McDonaldsUK to bring news of #McStrike ✊

Low-paid workers deserve justice, £10 per hour, and a union.

Join us to build the fight for workplace rights with our BFAWU friends and partners. pic.twitter.com/NEgqi46XUG

US groups have also expressed their solidarity:

May 1: It's going down! Workers in the U.K. are walking off the job to fight for fairness and dignity. Show your support for the #McStrike: https://t.co/AQyZHmEVSv pic.twitter.com/26F7cWG0to

Last year U.K. McDonald's workers went on strike and won raises. This year, workers will go on strike on May Day for fair wages for all, fair hours, and union recognition. Show your support: https://t.co/kAqnR3kYHG #McStrike pic.twitter.com/EPKKclfrQB

U.K. McDonald's workers are not only going on strike because they earn too little, but also because they face unpredictable scheduling. It's time for fairness. Support the #McStrike! https://t.co/EHpo9b87SV pic.twitter.com/I3Y3NiTmfO

The Conservative Party may want us to forget about workers’ rights. But this year, McDonald’s workers are helping to make the ongoing struggle for fair working conditions impossible for Britain to ignore.

– Support Fast Food Rights and donate to the McStrike! fund.

– Read about the effect of poor working conditions on people’s mental health.