David Cameron has a lot in common with McDonald's, and it's all bad - Canary 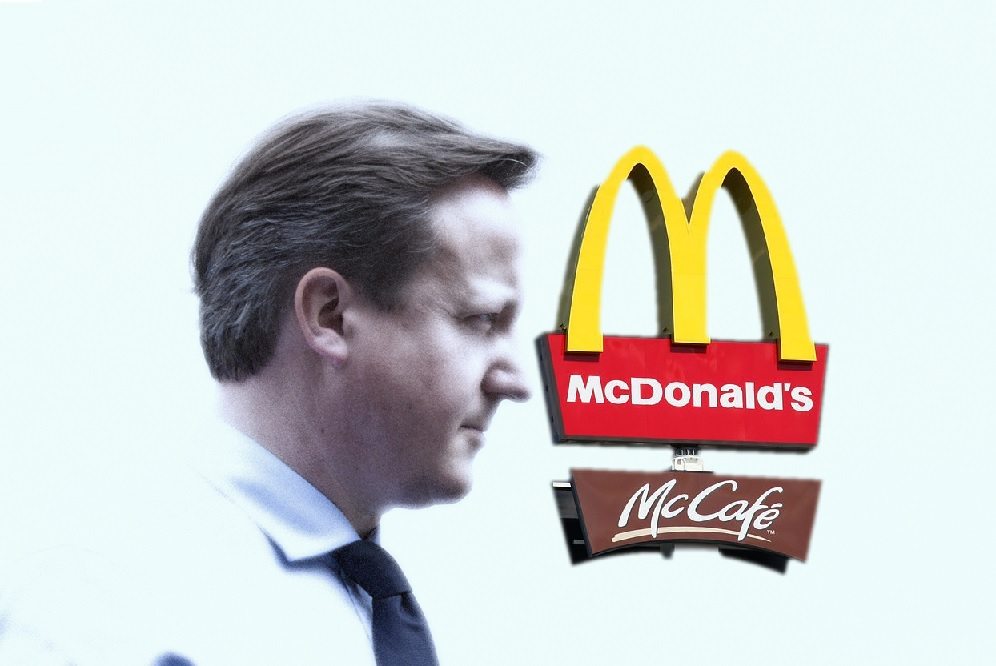 On 20 April, David Cameron criticised the Labour party for banning McDonald’s from its conference later this year. But considering there are many good reasons to denounce McDonald’s, why would Cameron show such solidarity with the corporation?

Cameron defended McDonald’s at Prime Minister’s Questions (PMQs) on 20 April by stressing it was:

one of Britain’s biggest employers

But he failed to mention the company’s woeful history regarding workers’ rights, health, the environment, and tax avoidance. The French government have just announced that they are demanding McDonald’s repay €300m in unpaid taxes and fines.

Is it their business model he likes?

One answer might be that the Prime Minister sympathises with McDonald’s business tactics. Labour decided not to allow the company to have a display at this year’s conference because of the fast-food giant’s poor record on recognising trade unions and its “reputation for zero-hours contracts“. But Cameron clearly sides with McDonald’s on these issues.

Zero-hours contracts, says the Resolution Foundation, have now become a “permanent feature of the UK labour market”. In fact, up to 1.5 million people are on these contracts today, representing an increase of over 100,000 since 2015. The International Labour Organisation (ILO), meanwhile, has warned that the Tories’ controversial Trade Union Bill may actually breach international law.

What about their other ethical positions?

There are many other reasons to question the ethics of McDonald’s, including environmental and health concerns. But Cameron probably doesn’t have a big problem with these issues, either.

The Conservative government has proven itself hostile to renewable energy sources and friendly to non-renewable sources. For this reason, Friends of the Earth CEO, Craig Bennett, has criticised the government for “grotesque hypocrisy” over its claims to be tackling climate change. Regarding health, meanwhile, the Conservatives are currently placing immense pressure on the NHS in a number of ways, having already suffered £15bn of cuts since 2010.

Or is it their tax affairs?

While the evidence above suggests that Cameron shares a lot in common with McDonald’s, there is one final point to mention.

According to French business monthly magazine L’Expansion, France’s Finance Ministry asked McDonald’s to pay back €300m in taxes at the end of 2015 – including €100m in fines for tax avoidance. Profits were allegedly syphoned away through schemes based in Luxembourg and Switzerland.

In 2015, a report published by War on Want claimed that, between 2009 and 2013, European governments lost over €1 billion in tax revenues as a result of McDonald’s tax avoidance schemes.

The British Prime Minister can probably sympathise, having been caught up in his own tax avoidance scandal in recent weeks. First, his millionaire father was revealed to have been a tax dodger. Then, he admitted to profiting from tax avoidance schemes himself.

So the next time Cameron defends a company like McDonald’s, it’s worth asking why. Is he thinking about the economic well-being of British citizens? Or is he just defending the unethical behaviour of his corporate chums?