With just one word, this man solved the junior doctors dispute (VIDEO) - Canary 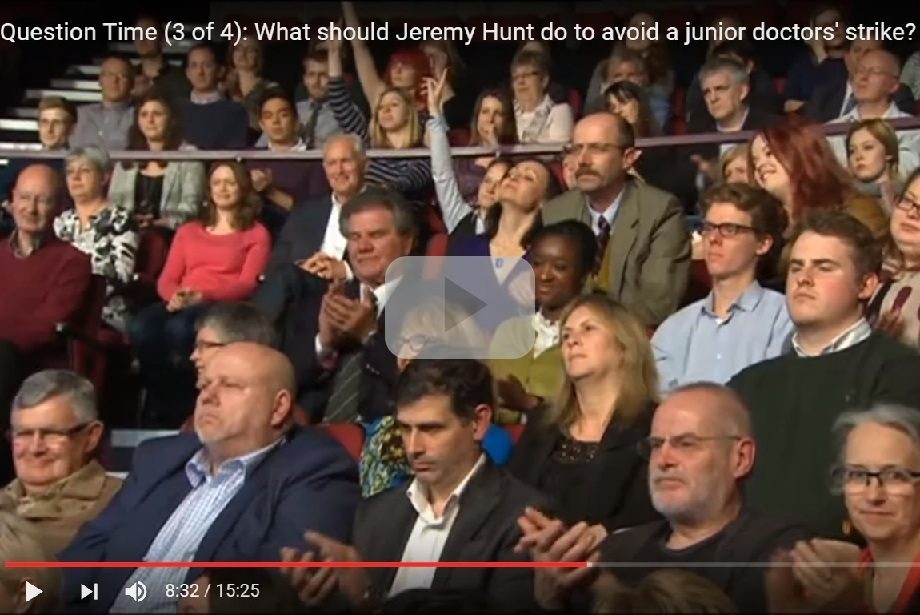 BBC Question Time on 21 April featured a heated debate about the junior doctors dispute. There was overwhelming support for the doctors, and clear opposition to the government’s confrontational approach. But one member of the audience got resounding applause for his contribution.

What should Jeremy Hunt do to avoid an all-out strike by junior doctors?

A voice immediately came from elsewhere in the audience:

This brilliant response brought the house down and left panellist Paddy Ashdown rocking back in his chair with laughter.

The full debate surrounding the junior doctors dispute can be seen here:

Kelman’s question was inspired by the revelation on 21 April that junior doctors are considering the possible launch of indefinite strike action. Such action would see junior doctors strike without a specific return date, and was one of several possibilities considered last week by the British Medical Association (BMA). Another option was mass resignation.

Next week, England will see junior doctors undertake their first full walkout in the history of the NHS, as a result of Health Secretary Jeremy Hunt’s confrontational decision to impose an unpopular new contract on them.

Back on BBC Question Time, there was very little sympathy for Hunt. One former firefighter in the audience insisted that the junior doctors’ strike action was inevitable given the government’s authoritarian approach, saying:

They’ve been forced to this situation.

When Question Time presenter David Dimbleby asked him what Hunt should do to resolve the dispute, he also replied:

And this seemed to be the mood of almost the entire audience, which cheered comments in favour of junior doctors and jeered the few voices which criticised them.

In fact, even panellist Tim Martin – owner of J D Wetherspoon and an opponent of strike action – said:

Running my business I would never impose a new contract on managers without their agreement first because it’s too confrontational. If you can’t get them to agree you can’t do it.

The debate on Question Time was yet another clear sign that Jeremy Hunt has almost no support for his anti-democratic plans. Not from junior doctors. Not from the general public. And not even from those opposed to strikes. His resignation, on the other hand, would likely gain overwhelming support.