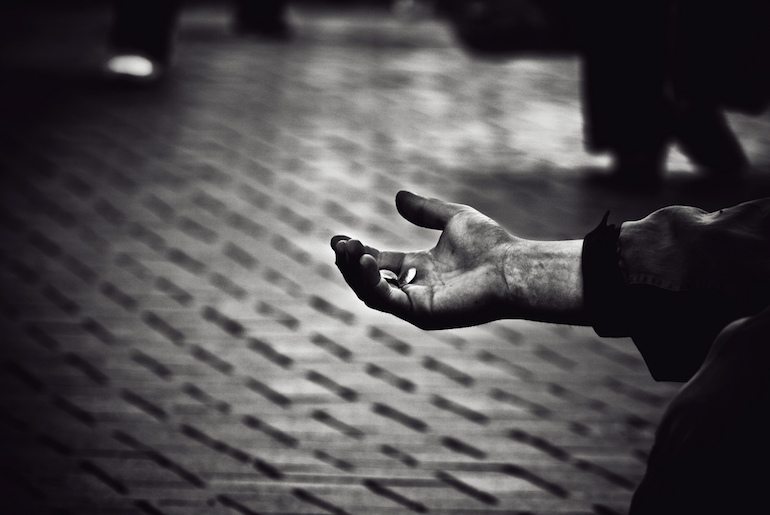 Worthing Council has just pushed through controversial new rules that allow it to impose £50 fines on people who sleep rough or beg for money. The move effectively criminalises homelessness in Worthing – and then allows the council to profit from it.

Conservative-led Worthing Council has voted to ban rough sleeping (“overnight camping”) and begging, and to issue people who break the ban with a £50 fixed penalty notice, or a court fine of up to £1,000 and a criminal conviction if they don’t pay.

Worthing is the latest in a series of councils to criminalise homeless people using new ‘Public Space Protection Orders’ (PSPOs), which were introduced by the coalition government in 2014 and allow councils to criminalise otherwise legal activities in specific local areas. VICE describes PSPOs as “ASBOs for your neighbourhood” and documents some of the more outlandish ways councils have been enjoying their new powers:

It is now a criminal offence to shout or swear in an area of Bassetlaw. Congregating in groups of two or more is banned in one estate in Guildford. It is illegal to “cause annoyance” in part of Lancaster. Possession of golf equipment is outlawed in an area of North East Derbyshire. Other activities which have been banned, or will be in the near future, include ball games, busking, feeding birds and playing music loudly.

But it is the increasing use of PSPOs to criminalise homeless people – which at least 36 councils are trying to do – that is the most disturbing.

Worthing Council waved through the new rules in the face of overwhelming local opposition. 14,000 people have signed a petition calling on the council to “say no to PSPO” and protests were held outside its town hall. Dan Thompson, the spokesman for the Worthing People’s Assembly, which has been instrumental in the campaign against the PSPOs, told The Canary:

The impacts will be huge. PSPO 2 mentions begging in terms of having a receptacle for begging, which will victimise homeless people trying to get by day to day… PSPO 3 discusses overnight camping and finding shelter overnight which will affect homeless people trying to find somewhere to stay… PSPO 1 looks at street drinking, but there is no discussion of treating people with addictions. Many people living on the street suffer from addiction as a product of being homeless. As one councillor pointed out, the PSPOs are all about punishment and don’t mention support or help.

The council denies it is targeting any “groups of individuals”:

The council were clear that the PSPOs were proposed as part of a wider programme to tackle anti-social behaviour, which balances prevention and early help with enforcement. Enforcement is only carried out where necessary and is focused on behaviour and not groups of individuals.

But Liberty, which has opposed PSPOs since their introduction, argues that Worthing’s measures will inevitably hit homeless people particularly hard:

As well as banning begging, the council has made it a criminal offence to spend the night in a vehicle or temporary structure intended to provide shelter or accommodation – which will obviously disproportionately impact the homeless.

Conservative government policies – from the failure to provide affordable housing to welfare cuts and sanctions – have seen homeless figures skyrocket by 55% between 2010 and 2014. In the past year alone, the number of people sleeping rough in England has risen by nearly a third. Meanwhile, cuts to councils have led them to drastically cut support for homeless people.

It’s deeply disappointing that Worthing has used these dangerous powers to criminalise some of its most vulnerable people. Begging and rough sleeping are not antisocial behaviour – they’re the result of poverty.

PSPOs are blunt instruments which don’t help those in need – they simply fast-track them into the criminal justice system. We hope the council will follow the example of other authorities around the country and scrap this misguided and counterproductive Order.

People are being pushed onto the streets – and then being criminalised for it.

As my colleagues Emily Apple and Kerry-anne Mendoza have previously reported, PSPOs are part of a wider trend towards criminalising homelessness under the Conservatives, with devastating impacts for homeless people and those helping them:

Criminalising poverty will only entrench it, or move the problem to somebody else’s backyard. Instead of a £1,000 fine and a criminal record, people in extreme poverty need support. As The Worthing People’s Assembly told The Canary:

The council should be looking to use the money that is being put to the PSPOs (around £800 to £1,000 on signage alone) to fund night shelters, which don’t stay open after March, and support. There are already laws in place to deal with antisocial behaviour, so why do they need these extra laws which will target the homeless?

It will take determined opposition from people across the country to defeat the criminalisation of homelessness, but it is possible. Hackney Council was forced to abandon its plans to introduce a PSPO targeting homeless people last year after 80,000 people signed a petition. You can find out how to get involved below.