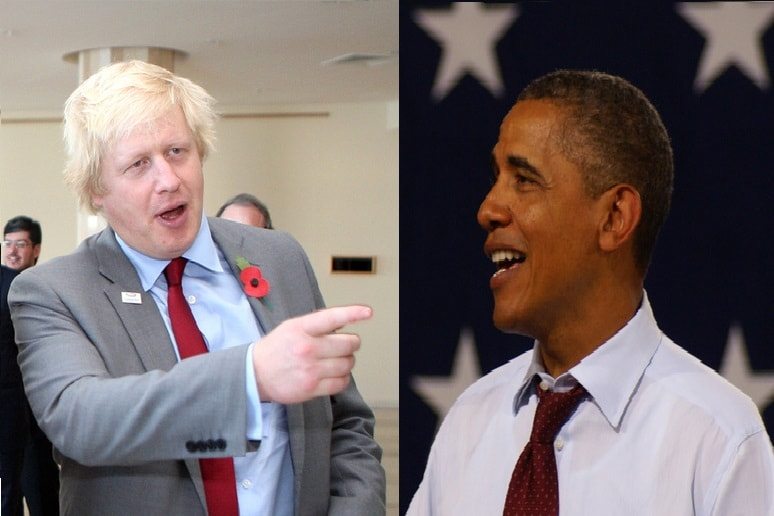 In a column for The Sun on Friday, Boris Johnson makes a complete buffoon of himself. And this time his trusty ‘off the cuff’ demeanour looks unlikely to save him.

Boris suggests Barack Obama resents Britain because of his Kenyan heritage, citing a bust of Winston Churchill that “vanished” when Obama entered the White House, as his only ‘evidence’:

But on day one of the Obama administration it was returned, without ceremony, to the British embassy in Washington.

No one was sure whether the President had himself been involved in the decision.

Some said that perhaps Churchill was seen as less important than he once was. Perhaps his ideas were old-fashioned and out of date.

Whether Obama moved the bust or not – it obviously does not mean he resents Britain.

In short – Somebody moved statue, don't know who, but Boris says shows "part Kenyan" US Pres might be anti British https://t.co/usPmKhEHQr

But, amusingly, Boris couldn’t even manage to successfully ‘attack’ Obama for the crime of moving an ornament. The claim is totally bogus.

Now, either Boris does not fact check his articles to a basic level or he is being very disingenuous. It’s hard to say which is worse. A 20 second Google search tells you that the White House itself debunked this claim in 2012:

This is 100% false. The bust is still in the White House. In the Residence. Outside the Treaty Room.

Boris has made himself look a desperate fool and embarrassed the entire nation in the process. Of course he knows the claim is false, he just peddled it anyway. He knows it, we know it and Obama knows it.

And Twitter knows Boris really dropped the ball this time:

Boris Johnson also forgot that he is Mayor of London & a cabinet minister. To use racial abuse to insult a visiting dignitary is a disgrace.

While Obama is a hawk presiding over crushing income disparity in the richest country in the world, using racial slurs against him – or anyone – is never on. Especially while he’s visiting the country  – it’s the polar opposite of statesmanlike. And all this from the man hoping to succeed David Cameron.

Arguably a more accurate summary than his Wikipedia page.

Boris Johnson and Nigel Farage both have family ties to Germany, a country that has far greater ancestral animosity to Britain than Kenya

As always, if bigots were to apply their own bigoted logic to themselves they’d hit a brick wall fast.

@BorisJohnson it is not compulsory to have head of WSC in President's office. Stupid irrelevant empty point to make #growupgetreal

Nicholas Soames MP agrees that the argument is pathetic whether true or not. The Green Party’s Caroline Lucas shot him down too:

Just appalling from Boris Johnson. No place in the #EUref debate for this kind of desperate bigotry. https://t.co/eKWJUAi0Xn

It looks like Boris is under fire from all sides of the political spectrum. Nick Cohen writes in The Spectator:

The thing about a Tory party divided over the EU referendum is that they are trampling over their own narratives. After presenting their own ‘special relationship‘ with the US as a positive for years, Boris is now contradicting that narrative in a grasping attempt to score referendum points.

Boris has accused Obama of being ‘anti-British’ because he’s “part-Kenyan”. This is a racist accusation of racism. You can practically hear Boris’ fingers scraping the bottom of the last barrel in the universe.

Tired of the Tory show?

Featured image via Doha Stadium Plus Qatar and Marc Nozell.