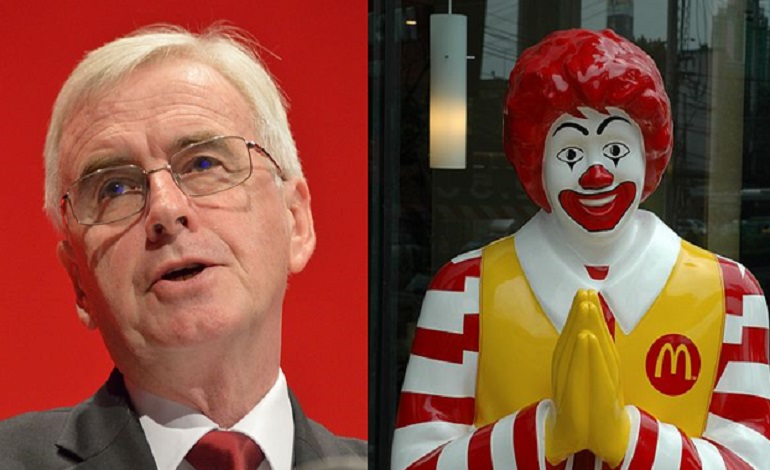 Shadow Chancellor John McDonnell has waded into a row between McDonald’s and its employees, after the fast food put a controversial clause in its social media policy.

McDonald’s staff say they’re not allowed to mention affiliation with “any political organisation” on their personal social media accounts. In documents passed to The Canary, the McDonald’s social media policy states: 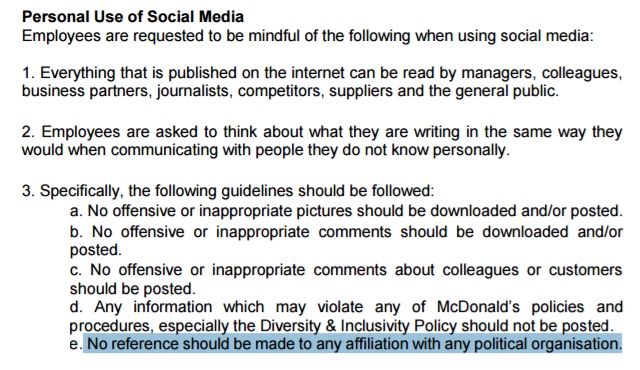 McDonald’s are among the architects of the low road economy; the place where profits are high, but wages are low; where the few enjoy the benefits, and the rest are left to seek two, three or in some cases, four jobs to supplement grotesquely low pay. Many McDonald’s employees we speak to describe poor working conditions, poor health and safety and a culture of bullying and harassment. With such a successful business for those at the top of it. It makes sense that McDonald’s wouldn’t want their workers to engage politically, join their union and fight for improvements to their lives, and the lives of their families.

This policy is designed to frighten workers away from from engaging with trade unions and to protect the insane profits McDonald’s extracts from the blood, sweat and tears of every McDonald’s worker.

But the fast food chain appears unrepentant. A spokesperson told The Canary:

The lines referenced sit within a wider social media policy. In isolation they have been taken out of context and we strongly refute any allegation around preventing freedom of speech. Our colleagues are at liberty to voice their political thoughts, but when doing so, we ask that these are presented as individual opinions and not those of the company. This is made clear in the introductory section of the social media policy and this requirement is common practice in many UK businesses. It is disappointing that McDonald’s policy is being misrepresented in this instance.

But Shadow Chancellor McDonnell disagrees. He wrote to McDonald’s CEO Paul Pomroy. The Canary was passed the letter, which states:

It concerns me that this blanket prohibition on mentioning any political affiliation whatsoever represents an infringements of your employees’ basic rights to freedom of political expression and freedom of association, as enshrined in Article 10 of the European Convention on Human Rights, and Articles 19 and 22 of the United Nations’ International Bill of Human Rights.

I’m sure that you will recognise that the health of our democratic system requires us to actively engage all sections of society in the political process… It is therefore concerning to see a major employer introduce such guidance which could have the effect of deterring political engagement, particularly amongst young people.

The BFAWU is currently campaigning for the rights of fast food workers. It’s calling for a National Living Wage of £10 per hour to be introduced so that working people do not have to be supported with benefits:

A Gimmick Wage not a Living Wage

It is concerning that a huge company like McDonald’s puts bans like this into its social media policy. And no one seems to be ‘lovin’ it’. As the Shadow Chancellor says, it should be adhering to its most basic of human rights obligations.

– If you work in the fast food industry and feel the BFAWU could help you, contact them on Twitter.

– Does your employer operate a similar social media policy? If so, get in touch with the author on Twitter.