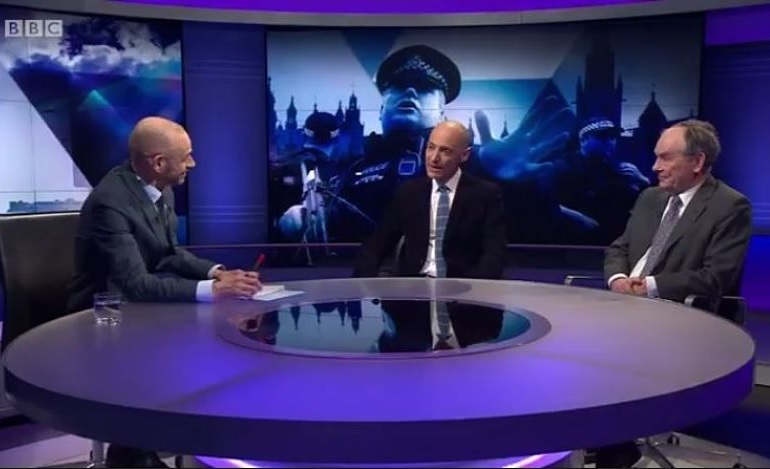 A Guardian journalist forced BBC Newsnight to face an uncomfortable truth on 22 March. And the video of it has already had over four million views.

BBC Newsnight presenter Evan Davis was speaking to Guardian journalist Simon Jenkins following the Westminster attack. Davis noted that, following such incidents, we have to choose whether to ‘maximise’ or ‘minimise’ the response.

Jenkins responded by saying that the BBC had made a clear choice. It had, he asserted, “opted… with the terrorist” by maximising coverage of the event. And it’s a dangerous sea change, according to Jenkins, from the response to terrorism in the past.

On 22 March, a terrorist drove into people on Westminster Bridge, before he entered Old Palace Yard and stabbed police officer Keith Palmer. Police then shot the attacker. The incident caused the death of four people and injured up to 50 people. 31 of those injured required hospital treatment.

Speaking to Davis about media coverage in the aftermath of the attack, Jenkins said:

You have a choice of prominence. The prominence given to them now, I think, is aiding and abetting terrorism. I really feel that. You should choose to treat it as a crime.

Jenkins then compared the media’s current response to what had happened in the past:

Under the IRA terrorists, even under the PLO ones, we treated them as crimes. In this case, probably some crazy guy for all I know, who’s gone mad, he’s done something really stupid and he’s dead. It’s a crime.

This happens to have taken place in parliament, which is indeed serious, and people have died. I’m not underplaying that at all and it should be publicised. It’s quite different from ascribing it with this tremendous clutter of politics and Islam, and religion. It’s quite wrong and it is a new phenomenon.

Jenkins asserts that wall-to-wall coverage aids terrorists by giving them publicity. But it’s arguably not only terrorists who benefit from too much, or sensational, coverage. Exaggerating the threat also empowers politicians who seek to capitalise on the “crime” to push their own political agendas. And it’s the perfect gift to far-right scumbags who lie in wait for opportunities they can use to divide communities in the UK.

Also, excessive media coverage of such acts on British soil combined with limited, or no, coverage of the deaths caused by Western military action in other countries also feeds into the terrorist narrative. It allows them to claim we care not what we do to others, only what happens to ourselves.

So while it is natural, and important, that media outlets document this tragedy – and those around the world – how we do so is crucial. Because that coverage has the potential to further the case for hate or love.

And we need to ensure it’s the latter.