Katie Hopkins just lost the right to call anyone a 'precious snowflake'. Ever. - Canary 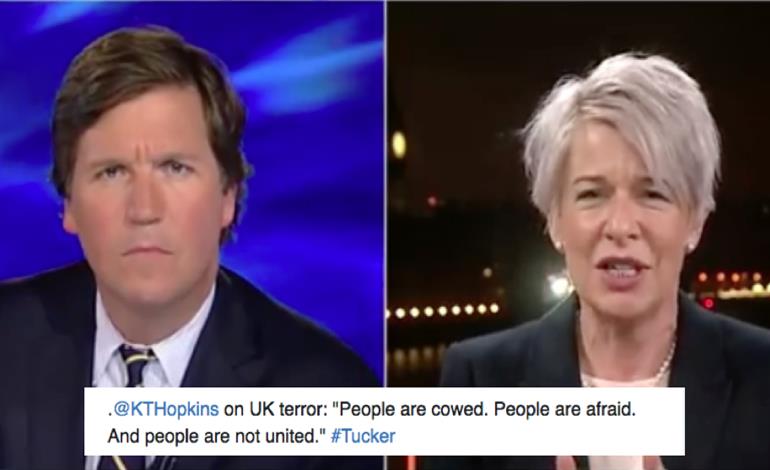 In the wake of the 22 March London attacks, much of the UK united in respectful grief and soldiered on. But one section went into complete meltdown. Despite all their bravado, when the shit hit the fan, Katie Hopkins and her rent-a-mob hit the panic button. They are the ‘precious snowflakes’.

Put on your big girl pants

Katie Hopkins is a trollumnist for The Daily Mail. Paid to troll decent people by defiling even the most basic tenets of human civility. She has helped to import the US far-right insult ‘precious snowflake’ to describe anyone with a functioning conscience. And she loves to tell others to put on their big girl pants.

She was un-moved when scores of war-fleeing refugee families began drowning in the Mediterranean as their flimsy escape vessels sank. She claimed she didn’t care about the “coffins and bodies floating in water”, writing:

Make no mistake, these migrants are cockroaches. They might look a bit like ‘Bob Geldof’s Ethiopia circa 1984’ but they are built to survive a nuclear bomb.

Once gunships have driven them back to their shores, boats need to be confiscated and burned on a huge bonfire.

But Hopkins isn’t so bullish when the terror strikes closer to home. In fact, after this week’s attack in Westminster, Hopkins became flat-out hysterical. While Britain picked itself up and dusted itself off, Hopkins wailed on like an old Mini Metro with a brick left on the accelerator. While Londoners attempt to move forward, Hopkins’ column in The Daily Mail read like a terrified toddler clinging to mother’s legs and screaming: “But… but… the MONSTERS!”

This was how she described London on Fox News:

.@KTHopkins on UK terror: "People are cowed. People are afraid. And people are not united." #Tucker pic.twitter.com/QNFr4cY996

Not people, Katie. You.

Hopkins and the far right like to coat themselves in the glory of my grandparents’ generation. The World War II generation. They’ve got some fucking nerve.

WWII-era Britons faced nightly raids by the German air force. Ace pilots in Focke-Wulf fighter jets cruised the skies, blowing whole communities to pieces. And they withstood it, with dignity. Meanwhile, Hopkins is holding public panic parties over a lone arsehole in a Hyundai.

It makes you wonder how Hopkins would manage if she’d been born in Syria, or Yemen. She shows none of the fortitude displayed by the refugees she spends each day defaming from her column. When I was reporting from Gaza during Operation Protective Edge in the summer of 2014, Israeli forces attacked a small town called Shuja’iyya. The IDF launched a shell into this civilian area every six seconds for seven hours. These civilians families endured this invasion for 52 days. And Hopkins was all mouth:

Gaza is a nightmare. But Hamas are playing the media better than Israel. Using your injured kids as social media weapons is wrong.

Yet flash forward to London in 2017, and she’s hyperventilating in the face of an hour of uncertainty.

What happened this week in Westminster was terrifying, and sad. Four people were killed by a man with hate in his heart. The lives of those who loved them will never be the same. We must acknowledge this. And we must acknowledge something else too. Living in Britain today makes us about as safe as any creature that ever walked the earth. This does not minimise what happened this week. But it does put it properly in perspective.

A dose of perspective

While Hopkins was drip-feeding hatred from the safety of her home office, people in Yemen, Afghanistan, Syria, Iraq, Gaza, and many other places around the world faced real terror. Just this week:

We are lucky enough to consider what happened in Westminster this week a tragedy. For many people around the world, a day where ‘only’ four people die in a terror attack would constitute a miracle. In past eras of Britain, the same would be true. It does not betray the killed, injured and grieving to put the Westminster attack in perspective. It is a service. We honour the victims of violence best by refusing to break down or self-combust with hatred and bigotry.

Being open-minded and accepting is easy when everything is rosy. It is the tougher times that put our values to the test. And this is the difference between bravado and courage. Bravado is weak, ego-driven, and reactive. It is easily provoked and manipulated. But courage is real power. Courage doesn’t bend, and it doesn’t break. It doesn’t cave in to fear. It makes those who hold it steadfast and unfuckable with.

This week, each person in Britain had a choice between the bravado of Hopkins, and the courage of better values. Seeing the majority of people in Britain choose courage is a beautiful thing.

– Donate to the crowdfunding campaign that royally pissed off Katie Hopkins.