Unions are stepping up their fight for higher wages, here's why - Canary 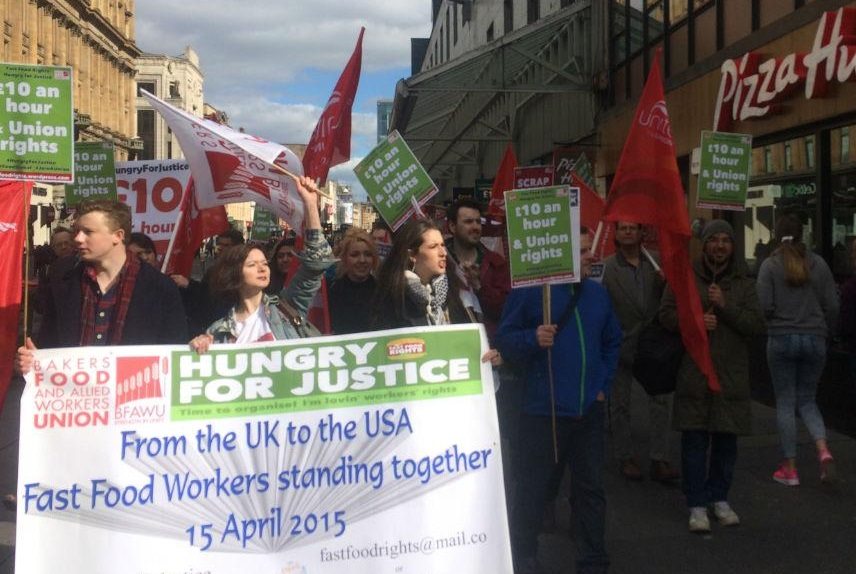 A University of Oxford study has recently shown that increased minimum wages improve the mental health of workers. With this research in mind, unions are using International Workers’ Memorial Day 2016 to call for a £10-an-hour minimum wage.

The link between wages and mental health

On 8 April, a study led by the University of Oxford concluded that:

wage rises for low-paid workers reduce feelings of anxiety and depression partly, at least, because they are under less financial strain.

The research looked at the difference between workers who saw their wages rise in 1999 due to the introduction of the national minimum wage and other low-paid workers who did not see an increase in their wages at the same time.

According to the lead author of the paper, Dr Aaron Reeves:

This study proves that wage rises significantly improve the mental health of low-paid workers. This suggests that the new national living wage is likely to have a similar positive effect in the short-term for low-wage workers.

Professor David Stuckler, a co-author of the study, said:

Our study found that increasing wages for low-income workers can have as powerful an effect on mental health as prescribing antidepressants.

The Bakers, Food and Allied Workers Union (BFAWU) told The Canary that mental health is a particular concern at the moment:

The three main factors contributing to these problems, the union says, are:

This is why the BFAWU is currently campaigning for an increased minimum wage of £10 an hour, an end to zero-hours contracts, and an end to discrimination against young people (who are often paid less for doing the same job as those who are older than them).

remember the dead: fight for the living

On 28 April every year, unions organise events which remember people killed at their places of work. They also emphasise the importance of continuing the unionised fight for workers’ rights in order to stop such tragedies from happening again.

In 2016, the TUC explains, the IWMD theme is “Strong Laws – Strong enforcement – Strong Unions”, as there are “growing attacks on health and safety protection” throughout the world today, including in Britain. For example, it says:

Unionised workplaces are safer, yet the Government is trying to stop unions protecting the health and safety of their members… and [is] also trying to reduce our right to strike when things go wrong.

On Thursday 28 April, the BFAWU will have an event outside the Oxford Street McDonald’s in Manchester at 1.15pm. It is calling for talks with the company over its poor record on workers’ rights.

– Find out what is happening in your area on 28 April.

– Organise a minute’s silence for Workers’ Memorial Day in your workplace.

– Hit Twitter on 28 April and let the world know how IWMD has been commemorated where you live by using the hashtag #IWMD16.

– If you work in the food industry, find out more about the BFAWU here.