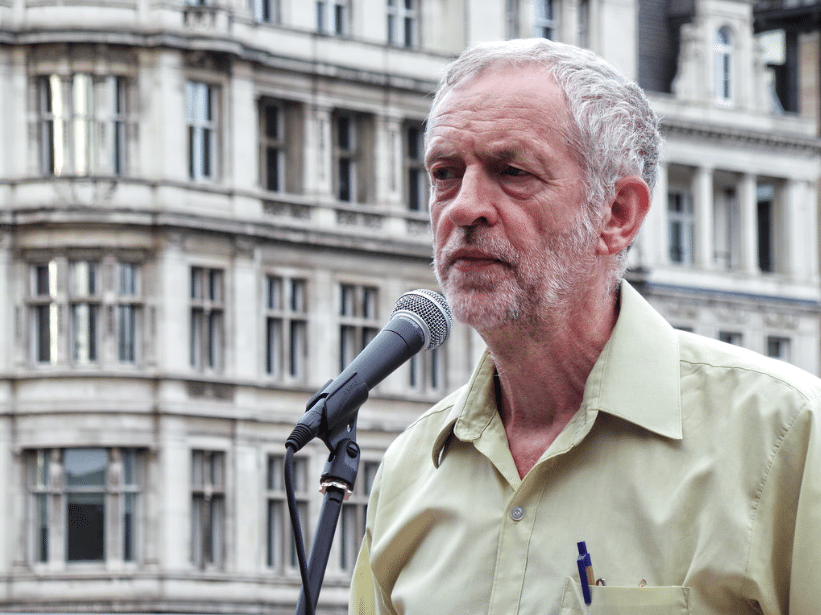 It is time to speak out against the concerted and, loosely, coordinated effort to silence Labour leader Jeremy Corbyn and critics of Israel, by smearing them as anti-semites. As a journalist who has been engaged in the Israel-Palestinian conflict since I was 20 years old, this tactic is nothing new to me. But I have never witnessed (in the UK at least) the kind of sustained and widespread attacks that have happened in recent weeks. For this reason, it’s time to put forward a powerful statement on why our team at The Canary refuse to be censored by this hypocritical and cynical smear campaign.

It appears that enemies of Jeremy Corbyn’s progressive plans for the Labour party have discovered some common ground. Blairites within the party and the media, along with their conservative peers and the pro-Israel lobby, all lose out if Corbyn succeeds. So, in short, they are seeking to take him out of play by hitting him where it is mutually beneficial – his long-standing criticism of Israel’s illegal occupation of Palestine.

The efforts to deliberately confuse anti-Zionism (criticism of the political movement to establish an apartheid Jewish state), and anti-semitism (the prejudice and persecution of Jewish people) are longstanding. Israeli advocacy groups within the EU have been attempting to formalise the bogus definition of anti-semitism since at least 2005. As Ben White reports for Alternet, as recently as March 30 this year:

Eric Pickles, UK Special Envoy for Post-Holocaust issues and chair of Conservative Friends of Israel, revived the discredited definition by publishing it on the government’s website.

By setting up this framework, such groups simply have to wait for someone to make a criticism of Israel – then launch their attack. Here’s how it works:

Some journalist or pro-Israel group seize on an anti-Israel statement (generally scouring social media accounts over years). They then release it as a shocking revelation. Pundits and political opponents then whip up some mock outrage until they can force a resignation or suspension – and so they go on repeating with each subsequent target.

In the case of Labour activist Vicky Kirby, the allegations of anti-semitism absolutely bear true. Her statements were despicable and indefensible. However, since then, the project has expanded to include any and all expressions of outrage at Israeli atrocities.

The treatment of Naz Shah is a case in point. The contemptible conservative blogger Guido Fawkes released a Facebook post that Shah published during Israel’s 2014 assault on Gaza. The post stated that the solution for the conflict would be to relocate Israel to the US as a 51st state. Is that emotive? Yes. Does it make a powerful political point? Yes. Israel receives more than $3bn every year in defense funding from the US, which it uses to enforce a brutal and illegal occupation of Palestine. Israel is an apartheid state, and it was certainly not considered racist to call for British occupiers to get out of the colonies of Rhodesia, South Africa and elsewhere – even those colonialists who had lived in the country for generations.

It is also worth noting that none of these come-lately crusaders against anti-semitism utter a word against Israel when its statesmen and women call openly for the ethnic cleansing and genocide of the Palestinians. Jewish-Israeli journalist David Sheen provided staggering testimony to the Russell Tribunal on Palestine recently, which tore the hasbara veil from Israel. How much of this has ever been reported by the UK journalists currently expressing such horror at the thought of racism, ethnic cleansing and genocide? Answer: none.

Who are the real anti-semites?

The truth is, the scourge of anti-semitism is not the preserve of the left, or Labour, or any political or social group. Prejudice rears its ugly head everywhere, and should be dealt with powerfully – regardless of source. It should certainly not be used as some political football, and turned into a point-scoring effort. But this is exactly what the groups are doing to Corbyn and the progressive left.

If you want a glimpse into just how far such attackers are willing to go to smear critics of Israel, these examples provide a devastating insight.

During 2014’s Operation Protective Edge, 327 Holocaust survivors and their descendants wrote an open letter to Israel calling its treatment of Palestinians by its proper name — genocide. 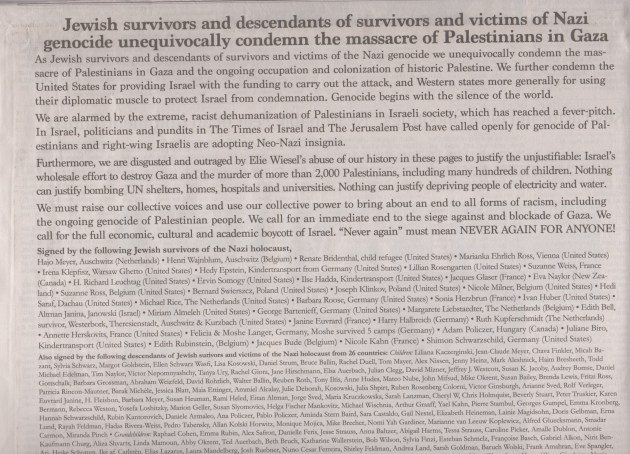 These people, who survived the worst nightmares of the Nazi regime, said clearly:

“Genocide begins with the silence of the world.

‘Never again’ must mean NEVER AGAIN FOR ANYONE!”

So how did Israelis react to this letter?  Here are just a sample of the responses from Jewish Israelis on Facebook: 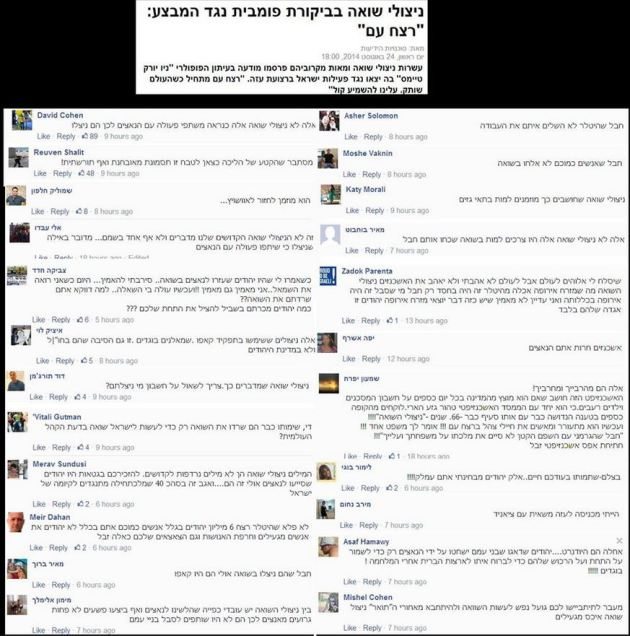 Sickening. But it isn’t just Jewish-Israeli yobs on Facebook who denounce the memory of holocaust victims and survivors for political ends. Israeli Prime Minister Benjamin Netanyahu did just the same when addressing US Congress last year. The Israeli PM echoed a distasteful trope – common in modern, muscular Israeli society – that victims of the Nazi holocaust were too weak. The libel won huge applause by Congress and mass support on Twitter.

However, Jewish-American journalist Max Blumenthal was quick to point out the implications of this slight on victims of the Nazi holocaust.

Here in the UK, Blairite columnist and Twitterati figurehead Dan Hodges was recently approached by a Jewish person who politely requested he stop exploiting anti-semitism for political ends. Hodges gave a breathtakingly anti-semitic response, denouncing him as a “useful Jewish idiot.”

It is not conspiracy theory, but fact, that Israel has a propaganda department devoted to producing ‘hasbara‘ – that is positive positioning of Israel, and the assault of critics. This is not just in the mainstream media, and corridors of power around the world, but on social media too. The Israeli government pays students thousands of dollars a year to praise Israel and attack critics online. These students report Facebook pages, Twitter accounts and other online forums in efforts to shut down criticism of Israel online – with accusations of anti-semitism. As veteran Jewish-Israeli journalist Gideon Levy wrote in Haaretz last year, in a devastatingly critical piece entitled “Israeli Propaganda Isn’t Fooling Anyone Except Israelis“:

propaganda shall cover for everything. We’ll say terrorism, we’ll shout anti-Semitism, we’ll scream delegitimisation, we’ll cite the Holocaust;…We’ll wail that the whole world is against us and wants to destroy us, no less.

You can blame the Palestinians for everything and obscure the simple fact that this brutal occupation is Israeli. You can tell the world that it all belongs to us because the Bible says so and believe that anyone will take you seriously. You can be sure that the memory of the Holocaust will serve us forever, and justify any injustice.

Levy has paid a high price for his long term support of the Palestinians and his role as one of Israel’s fiercest internal critics. When I interviewed him in 2014, shortly before I entered Gaza to report on Operation Protective Edge, the Chairman of the governing Likud Party coalition and member of the Knesset (Israeli parliament) Yariv Levin actually called for Levy to be put on trial for treason.

“Gideon Levy is the lowest kind of provocateur,” Levin told Israel’s leading Channel 2 news. “When someone who lives among you turns himself into an enemy mouthpiece, while spreading lies, out of the hope that this will undermine your ability to wage war – this is called, in simple Hebrew, ‘treason’.

He is frequently accosted in the street, such as this incident in Ashkelon, where he was mobbed by angry fellow citizens, one of whom thrust money into his palm and told him to put it towards a new home in Gaza.

This is how Israel deals with critics: it jails them, kills them, or denounces them.

We will not be silenced

Our organisation stands for the rights of Palestinians (and Israelis) to live in peace and justice. It is because of the lessons learned from racist, colonial travesties of the past, including the Nazi holocaust, that we cannot sit in silence while something equally horrid is perpetrated in Israel.

I write this as an LGBT woman who’s caribbean grandfather migrated to Britain in the 1950’s. He met and married a white Bristolian woman, and faced unimaginable prejudice. I am not prejudice-free, in fact I stumble upon unacknowledged prejudices of my own time and again. But I am committed to exposing and ending those prejudices.

Let us be honest, no one is more delighted by the atrocities of the likes of Mugabe, ISIS, or indeed Israel, than those who hold racial/religious prejudice towards the perpetrators. It is a toxic element of the human condition that people seek justification for their prejudices. So let me be clear: anyone seeking to cloak their bigotry under the petticoats of persecution meted out to the Palestinians will find no sanctuary here.

For enemies of Corbyn and the progressive left to leverage this into a sickening smear campaign against all those who stand against prejudice – to abuse the memory of holocaust victims for their own political ends – is almost beneath our contempt. We denounce these appalling tactics in the strongest terms. They are repulsive and repugnant, and they have no place in our public conversation.

The Canary exists to confront anti-semitism. Not only anti-semitism, but all prejudice, whether based on race, sexuality, gender or anything else. Which is more than can be said for those promoting the campaign against Corbyn and the progressive wing of the Labour party right now. If you agree, make this stand with us. Call out prejudice wherever you find it, and let’s have the same policy for bullshit too.