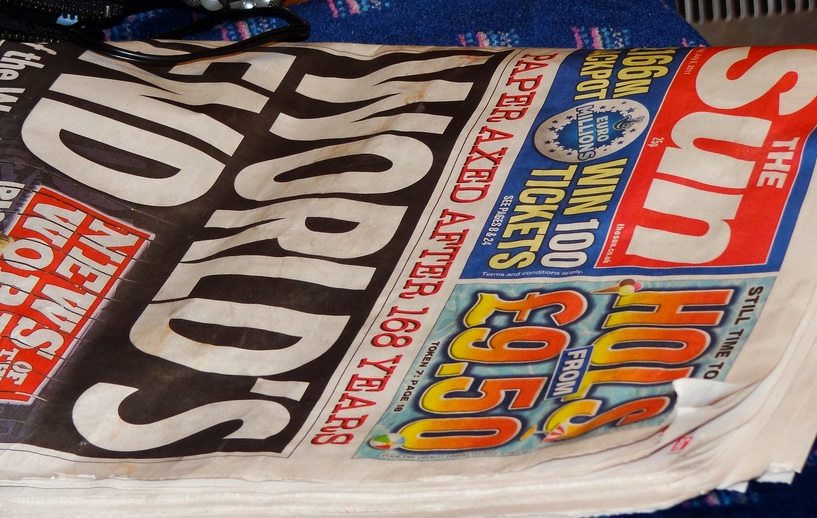 The Sun newspaper’s week just reached a new low. A High Court judge has ruled that there is enough compelling evidence of possible phone hacking at the title to warrant a legal trial against them.

The judgement comes in an already torturous week for the paper. Its sickening smear of Liverpool fans following the Hillsborough disaster has been brought back into focus, following a jury verdict completely absolving fans of any responsibility for the tragedy. Furthermore, the fact that The Sun even failed to cover the fans’ vindication has also faced much condemnation.

Now the paper has learned it will be hauled up in court over phone hacking allegations. It’s a tough week to be Murdoch.

One of the media magnate’s treasured newspapers, the News of the World (NoW), has already been shut down for engaging in the despicable practice. But News UK, the parent company of Murdoch’s titles, has always pleaded The Sun‘s innocence over allegations of phone hacking.

However, News UK has been engaged in a long string of lawsuits following the NoW hacking case, and some of these have included allegations against The Sun.

Since early this year these claims have been heard by Mr Justice Mann. The evidence submitted in the case has included emails from 2006 involving The Sun’s associate editor Geoff Webster. These emails seemingly show Webster’s involvement in the hacking of the phone of Heather Mill’s sister.

In light of this, and other evidence, the judge has approved legal action. According to The Guardian, the ruling did not accept the evidence at this stage as conclusive proof of illegal activity, but that it was enough to ensure a full trial goes ahead.

The ruling pertains to allegations by four claimants, including entertainer Les Dennis. But Chris Hutchings, the claimant’s lawyer, has said:

The decision will also affect up to 50 further cases which are about to be commenced against the Defendant and will widen the disclosure of documentation it will have to provide going forward.

So, although the ruling is based on a small number of claims, it opens the door for a whole lot more. It will also bring Rebekah Brooks, who was editor at The Sun between 2003 and 2009, back into the spotlight. Brooks has recently been reappointed as chief executive of Murdoch’s UK operations. This scandal could throw her much criticised second chance into disarray.

It seems The Sun is likely to be the focus of many a headline in the coming months. Whether they survive the coming storm is anyone’s guess, but one thing is certain, it’s time for Murdoch to buckle up, because The Sun is now on course for a very bumpy ride.

Keep updated with developments with Hacked Off.