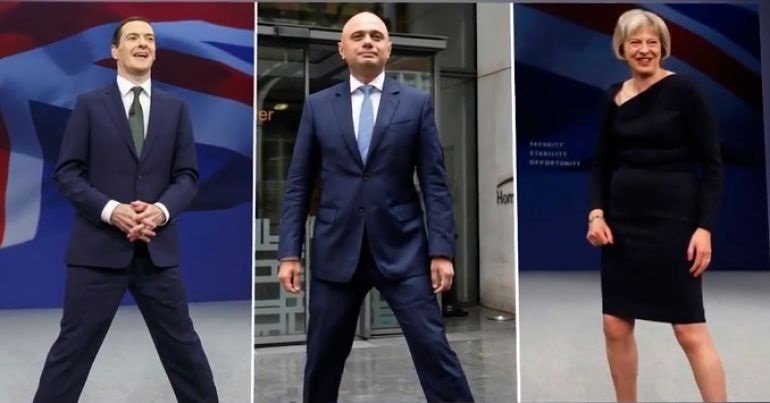 New home secretary Sajid Javid adopted the ‘Tory power stance’ on his first day in office. And since he rekindled the pose used by a number of Conservative big-wigs before him, people have been questioning its origin.

But people, you need rack your brains no further. Because a British comedian has found the answer.

My kingdom for a horse

In Shakespeare’s Richard III, the title character finds himself horseless on the battlefield. Aware of how vulnerable that makes him, Richard cries: “A horse, a horse! My kingdom for a horse!”

Now, it appears that the Conservative Party and Richard may have quite a lot in common. Because, as comedian Omid Djalili has pointed out, the Tory power stance may be a physical consequence of never leaving home without the all-important mule:

The “Tory Power-Stance” looks like they rode in on a Shetland pony that’d bolted & they’re all trying to style it out pic.twitter.com/h9ujp4icok

Djalili is right. It does look like they rode in on a horse that bolted and they’re dealing with the rather uncomfortable effects of that. And it would make more sense overall if that were the case. Because it would mean that Javid and others didn’t choose to make that stupid pose.

And really, no one would choose to do that, right?

Not everyone agreed with Djalili’s theory, though. Some think it is, in fact, done on purpose in an attempt to emulate any number of the party’s potential ‘heroes’, such as the band Status Quo:

… or the animation He-man and the Masters of the Universe:

It’s all a bit Masters of The Universe isn’t it…. pic.twitter.com/AU5JHVVtpt

Most, however, appear to think a ‘heroic stance’ by the Prince Regent in a Blackadder episode has a lot more to do with it:

Those stances remind me of something. pic.twitter.com/wCre4F6WuC

Unfortunately, Djalili’s interjection in the Tory power stance debate didn’t provoke much chatter on the most important aspect of the mystery. This is, of course, why should anyone give a rat’s arse about Conservative ministers standing in a certain way. Because the only question that matters is: why are they building a country that works for no one but themselves?

Nonetheless, we should all hope Djalili’s theory is right. Because if that ludicrous pose is an indication of how Conservatives react when something bolts, imagine what a funny sight it’ll be if Britons ditch them all at the next election.