Just when you think things can't get worse for Amber Rudd, the UN drops a bombshell on the Home Office - Canary 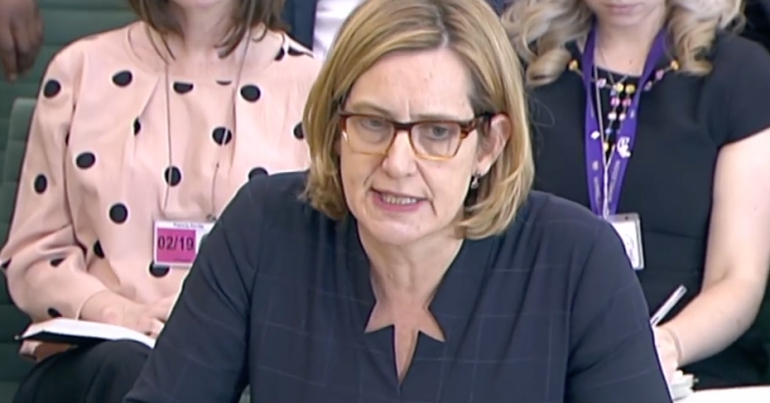 Home secretary Amber Rudd is facing calls to resign over the Windrush scandal. From bungled statements about deportation targets to the suffering her department has caused, the crisis has gone from bad to worse.

And now there’s even worse news for Rudd and the Home Office. Because human rights experts from the UN have expressed concern over “structural racism” in the UK.

The experts were responding to data on the number of Black, Asian and Minority Ethnic (BAME) people killed as a result of contact with “state security”. They stated:

The deaths reinforce the experiences of structural racism, over-policing and criminalisation of people of African descent and other minorities in the UK.

According to the press release from the UN:

Data disclosed by the Metropolitan Police in August 2017 found that people of African descent and of ethnic minority background, in particular young African and Caribbean men, subject to deadly use of force by restraint and restraint equipment, were twice as likely to die after the use of force by police officers and the subsequent lack or insufficiency of access to appropriate healthcare.

This is backed up by data from Inquest, a charity that supports families and investigates deaths in custody. According to its analysis of data across England and Wales from 1990 to 2018:

The UN experts further found there was a lack of accountability in investigating and prosecuting anyone for the deaths:

Failure to properly investigate and prosecute such deaths results in a lack of accountability for those individuals and State agencies responsible, as well as in the denial of adequate remedies and reparation for the families of the victims.

This is reflected in the fight that the family and friends of those killed in custody have endured. For example, Marcia Rigg, whose brother died in custody, is still battling for justice ten years after his death. According to the United Friends and Family Campaign, Sean Rigg died:

Practically naked wearing only speedos and handcuffs, he lay on the cold concrete floor at the entrance of Brixton custody suite. Sean died on camera inside a cramped caged holding cell, surrounded by, and at the feet of, 5-6 police officers.

In the decade that I’ve fought for answers, I have faced an endlessly lengthy and unbalanced justice system. And despite a string of reviews, inquiries, set of recommendations calling for changes to police conduct, a damning inquest jury verdict, and a mass media campaign, no officer or institution has been held accountable for Sean’s death.

The UN findings on “structural racism” came in the week that the 25th anniversary of Stephen Lawrence’s murder was commemorated.

Following Lawrence’s murder and the bungled police operation, the Macpherson report into his death found the police acted out of institutionalised racism. 25 years on, not only is that racism still evident in the Windrush scandal, it is evident in the fact Lawrence’s family is still having to fight for justice.

Not only did the police fail in their investigation, they sent undercover police officers to spy on his family. Family and friends are still having to fight just to get the names of the police officers who spied on them, and those who authorised the surveillance operation. Rudd is also refusing to meet the Lawrence family to discuss their concerns.

When it comes to fighting racism, institutional or otherwise, there is no finish line.

You don’t get to an age when we can finally breathe out and say, ‘yes… no need to worry about racism anymore!’

25 years ago, the police were found to be institutionally racist. 25 years later, the Windrush scandal shows that racism is alive and kicking. And now the UN has condemned the UK for “structural racism”.

All of this leads directly back to the Home Office. This means the current home secretary, Amber Rudd, and the previous incumbent, Theresa May.

These findings show there is something rotten at the heart of government and policing. Platitudes and apologies are not enough. Action is needed. And urgently.