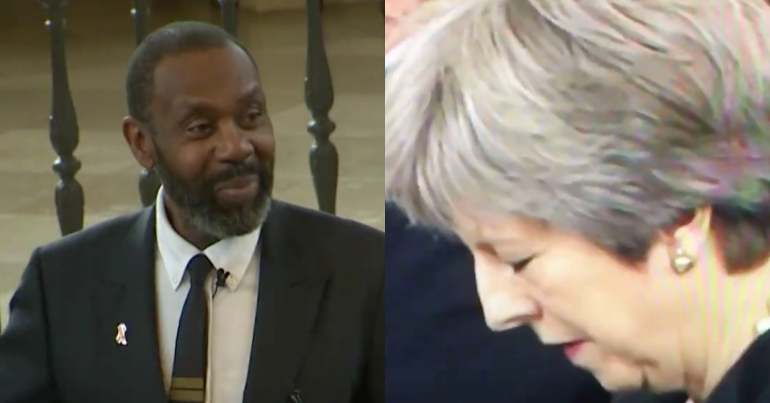 On 23 April, a memorial service was held to mark the 25th anniversary of Stephen Lawrence’s death. The service was attended by politicians including Theresa May, who had a front-row seat for the occasion. But she might wish she hadn’t. Because comedian Lenny Henry used the occasion to destroy her government’s record on Windrush and institutionalised racism.

“There is no finish line”

Henry started his speech speaking about the Windrush generation and asking:

Who’s got four pieces of documentation for every year they were alive?

But he had a central message he wanted to impart with his speech:

When it comes to fighting racism, institutional or otherwise, there is no finish line.

You don’t get to an age when we can finally breathe out and say, ‘yes… no need to worry about racism anymore!’

And his next line was a direct attack on May and her policies:

Henry then asked, looking like he was addressing the politicians:

We’ve got to sort that out, right? We going to do that?

He finished his speech with a powerful message of hope:

And I know it’s probably a cliché, but today feels like that, with this legacy, it is possible to make medicine from poison.

You can watch Henry here:

“When it comes to fighting racism, institutional or otherwise, there is no finish line.”

Addressing Theresa May and Jeremy Corbyn in the front row, @LennyHenry calls on politicians to sort out the #WindrushScandal pic.twitter.com/rve83GmVIK

Electrifying moment at the Stephen Lawrence Memorial Service when Sir Lenny Henry gently but powerfully lambasted the Windrush scandal with Theresa May sitting mere feet away.

Well done lenny henry for speaking out at may and eyeballing her and telling her as it is .at what she had done to the windrush generation .shes gotta cheek kneeling and saying prays hypocrite may

Others also lamented the lack of media coverage of the speech:

Following Lawrence’s murder and the bungled police operation, the Macpherson report into his death found the police acted out of institutionalised racism. 25 years on, not only is that racism still evident in the Windrush scandal, it is evident in the fact Lawrence’s family is still having to fight for justice.

Not only did the police fail in their investigation, they sent undercover police officers to spy on his family. But family and friends are still having to fight just to get the names of the police officers who spied on them, and those that authorised the surveillance operation.

Just a day after the memorial, Neville Lawrence was part of a delegation delivering a letter to home secretary Amber Rudd to intervene in the inquiry into undercover policing:

May has apologised for the appalling treatment the Windrush generation has received. But this will never be enough. Because the blame for the scandal lies directly at her feet and the “really hostile environment” she wanted to create for immigrants in the UK.