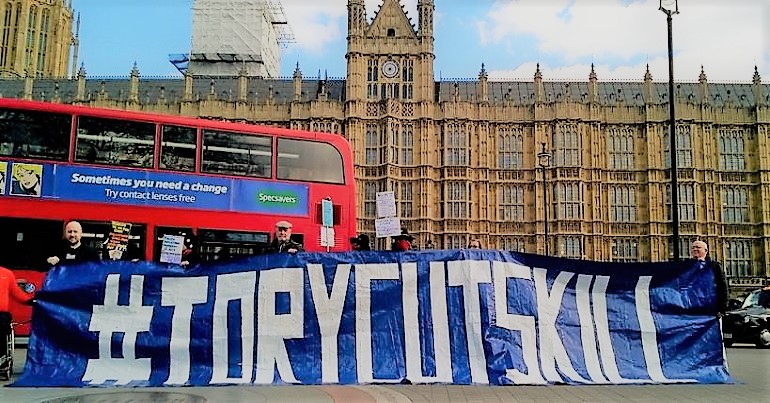 A report leaked to a national newspaper has revealed an ‘acute crisis’ for disabled people in England. Sadly, its findings will be unsurprising to many. Because organisations have repeatedly warned that disabled people are already living on a knife-edge.

The Telegraph obtained a copy of a report by the Equality and Human Rights Commission (EHRC) into the state of housing for elderly and disabled people. According to The Telegraph, the main points of the report were:

The EHRC executive summary reportedly said that some people had to ‘eat, sleep and bathe in one room’, and that the lack of accessible housing was exacerbated by developers seeing this type of housing as “less profitable”.

A spokesperson for the Ministry of Housing, Communities and Local Government told The Telegraph that:

We’re also providing councils with almost £1bn over the next two years to adapt properties for disabled and older people so they can live independently and safely.

But the EHRC findings, which stated there was an “acute housing crisis” in England, are nothing new.

In June 2016, The Canary reported on a UN report into the economic, social, and cultural rights of people in the UK. It criticised successive Conservative-led governments for their failure to address the housing crisis. But it specifically said it was “deeply concerned” about how the so-called bedroom tax and the housing benefit cap would impact on disabled people.

Then, in November 2016, another UN committee raised its concerns over the bedroom tax. It also said successive governments had violated disabled people’s rights by abolishing the independent living fund – a welfare payment which supported people to live independently and stay in their own homes.

Then, another UN report in August 2017 highlighted similar concerns, but it went further. It said there were breaches of the Equality Act 2010 in certain aspects of housing policy. The report also noted that successive Conservative-led governments had failed to make independent living a legal right. This had left many disabled people “institutionalised”.

Disabled people: living on a knife-edge

But successive governments have known this. For example, David Cameron’s government did impact assessments on the bedroom tax. They showed that two thirds of residents affected by it would be disabled people. And Theresa May had to do a U-turn on government plans to apply the benefit cap to supported living.

Yet still, the government continues to leave disabled people in the most precarious, and often dangerous, of positions. A study for the London School of Economics found that 1.8 million disabled people are not in the accessible accommodation they need. The Canary reported one such case – that of Bobby Carver, whose support worker had to drag him up and down a communal stairwell, to and from his second-floor flat. It happened because no accessible homes were available.

The EHRC analysis is welcome. But it’s also just another report to add to a long line of reports – which show the discrimination and regressive policies disabled people are subjected to. It seems that, while the Conservatives are in charge, little will change.