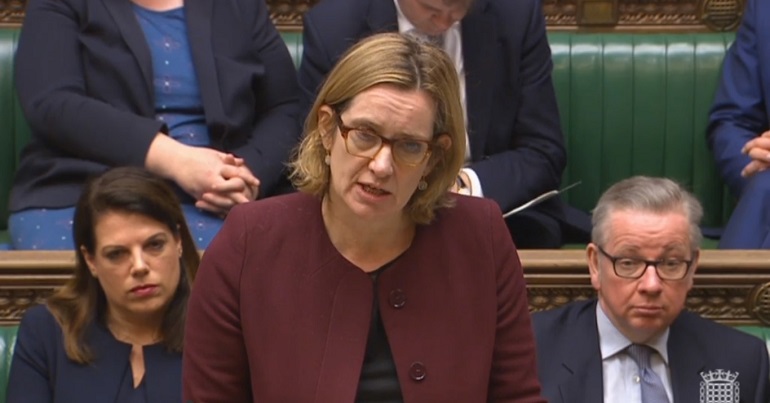 Diane Abbott is the latest MP to call for home secretary Amber Rudd to resign over the Windrush scandal.

“A matter of honour”

During urgent questions in parliament on 26 April, the shadow home secretary called on Rudd to resign, saying:

When Lord Carrington resigned over the Falklands, he said it was a matter of honour. Isn’t it time that the home secretary considered her honour and resigned?

"Another day, another shocking revelation on the Windrush scandal". The Home Secretary must consider her honour and resign. pic.twitter.com/XPeH4L6cOs

And Abbott was not alone. David Lammy and the Scottish National Party’s Alison Thewliss both joined her call for Rudd’s resignation.

“We don’t have targets for removal”

These calls follow Rudd’s testimony to the Home Affairs committee on 25 April. As Abbott explained:

Yesterday, giving evidence to the Commons Home Affairs select committee, the home secretary said, in terms, ‘we don’t have targets for removals’.

But the general secretary of the Immigration Service Union told the committee earlier that there was a net removals target, that enforcement teams had to meet. And they’re aiming to remove a certain number of individuals in any given month. The general secretary later confirmed that the target this month was 8,337, with targets on posters in regional centres.

Replying to Abbott, Rudd changed her tune from the day before. She told the Commons that “some offices… are working with” targets but that she herself had not been aware of them:

Diane Abbott calls for Amber Rudd to resign over the Windrush scandal pic.twitter.com/eYoz1OBlgc

Rudd said she could not give “a definitive answer” because the scandal had an “element of surprise”. She again blamed a “systemic failure” in the Home Office.

On 25 April, general secretary of the Immigration Service Union (ISU) Lucy Moreton told the committee that the government’s net migration target had been “translated down” to frontline staff. Moreton said that officers were put under “increasing pressure” to deport a certain number of people every month.

But when MP Yvette Cooper asked Rudd about targets later in the proceedings, the home secretary denied they existed. Rudd said:

We don’t have targets for removals… If you’re asking me ‘are there numbers of people we expect to be removed?’, um, that’s not how we operate.

Home Office immigration chief Glyn Williams also told the committee that he did not know about targets. Yet a 2015 report reveals a target of 12,000 departures, as reported in The Guardian.

On Twitter, Cooper described the Home Office response to her question about targets as “a complete fudge”:

This is a complete fudge answer to my question on whether the Home Office has targets for immigration removals after the contradictory evidence from the ISU & the Home Secretary at @CommonsHomeAffs today. Tomorrow I will be writing to the Home Secretary to get a proper answer pic.twitter.com/Xv1qYpkvuT

Rudd on the hook

The home secretary is still in the spotlight over the Windrush scandal. As is Rudd’s predecessor, Theresa May. So far, we have heard a string of promises about new measures to help the descendants of the Windrush generation get the documents they need. But what we need is a home secretary who knows what is happening in her department and can take responsibility for it.

If Rudd cannot do that, she should indeed consider her honour, as Abbott said, and resign.