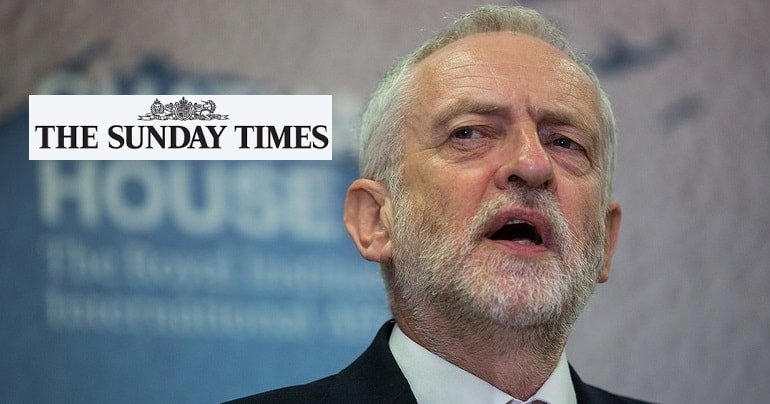 Alleging a ‘Moscow connection’, the article attempts [paywall] to explain away Labour’s 40% voteshare in the general election through Russian bots. In response, Labour MP Chris Williamson branded the story a “bullshit smear”.

This front page comes after a long line of attacks trying to paint Corbyn as pro-Russia. Not least, was BBC Newsnight. The flagship political show caused outrage in March after photoshopping the Labour leader onto a Moscow backdrop. Not long before, The Sun attempted to tarnish Corbyn as a Soviet asset because he met a Czech diplomat in 1986. This is part of the establishment campaign to delegitimise the Corbyn-led movement and, in the words of Owen Jones, “turn the clock back” on the 2017 election result.

But it’s nothing new. Painting threats to state and corporate power as agents of Russia has long been the habitual reaction from the establishment. Labour leader Neil Kinnock faced the same, from the same newspaper:

And in the 1980s, the powers that be used similar propaganda against the Campaign for Nuclear Disarmament (CND). The media and political class painted anti-war and anti-nuclear protestors as Soviet spies. One example is the following Sun front page: 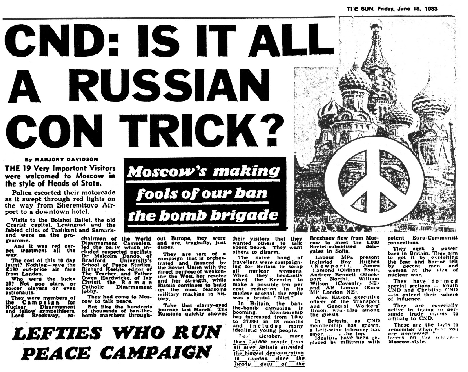 The Conservative connection to Russia

But it seems the media doesn’t only sideline Conservative links to foreign powers. A WikiLeaks cable exposed that the US wrote about the anti-Corbyn Labour MP Ruth Smeeth followed by the words “strictly protect”. WikiLeaks says the description means the Labour MP is a US “informant”. Yet the mainstream media has barely acknowledged this. Smeeth responded in 2011, saying she “would not consider” herself a US government source.

Double standards aside, the attacks on Corbyn and the progressive movement are part of a sinister trend. The powers that be appear desperate to stop the formation of the people-powered government Corbyn promises. It’s up to people to fight back.