Ahead of the local elections, Yanis Varoufakis points out a major flaw in Britain's system - Canary 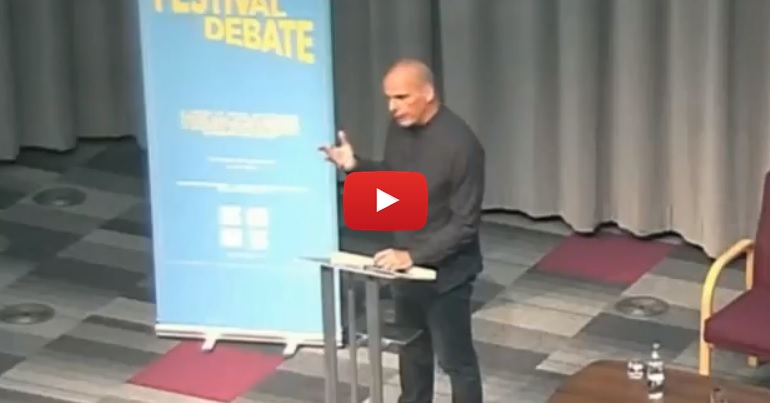 Just as England prepares for local elections on 3 May, renowned economist Yanis Varoufakis has highlighted a major flaw in Britain’s electoral system. And he calls on British progressives to deal with it as a necessity.

Speaking in Sheffield at a Festival of Debate event, Varoufakis had a strong note of advice for Jeremy Corbyn’s Labour Party. He said:

I’ve already declared my friendship and camaraderie towards Jeremy, but I’m going to be clear on this. The Labour Party’s position on electoral reform is unsustainable – I would go as far as to say contemptible.

We need proportional representation. It is remarkable to have a progressive movement that is supporting the first-past-the-post system.

A number of Labour MPs, journalists, musicians, and other figures on the left have long called for electoral reform. They argue it would tackle political disenfranchisement and disillusionment while making Britain’s elections more democratic.

Electoral reform is “a necessity” for progressives

Cross-party campaign group Make Votes Matter (MVM) and the Labour Campaign for Electoral Reform (LCER) published a report into Britain’s voting system back in 2017. This pointed out [pdf, p12] that votes with no impact (or “wasted votes”) in the 2017 general election stood at 68.4%.

Scottish TUC vice president Lynn Henderson says the current British system is “rigged against workers”. And Unite’s assistant general secretary Howard Beckett has insisted that “bringing an end to the archaic Westminster system is no longer a democratic nicety for progressives – it is a necessity”.

In 2017, meanwhile, MVM commissioned a poll. It found that 76% of Labour voters would back a manifesto pledge favouring proportional representation. Only 5% said they’d oppose such a pledge.

“Divisive, undemocratic, elitist” – not an electoral system we should be proud of

The 2017 election showed that progressive alliances can work as a tactic against the right in the meantime. But only a change in the electoral system will truly democratise British politics.

As MVM co-founder and facilitator Joe Sousek said in a press release:

More and more Labour members are seeing First Past the Post for what it is: divisive, undemocratic, elitist; essentially the opposite of everything the party stands for.

…we’ve provided speakers to dozens of local Labour parties. Almost every meeting we attend is overwhelmingly in support of Proportional Representation – often unanimously – and 17 local parties have already passed motions calling for change.

The UK Labour Party is the only democratic socialist or social democratic party in the developed world that supports First Past the Post. It’s time Labour listened to its members, backers, and voters by pushing for an electoral system for the many, not the few.

Labour should indeed listen to Sousek, Varoufakis, and its voters. Britain deserves a more meaningful democracy. And the sooner the party pledges to get rid of first-past-the-post, the better.

– See more from Make Votes Matter – and if you’re a Labour Party member, you can invite a proportional representation speaker to your local branch meetings here.

– Also check out the Festival of Debate – a series of public events in Sheffield which will run until 29 June.

– Join The Canary, so we can keep holding anti-democratic elites to account. And support other independent media outlets, such as: