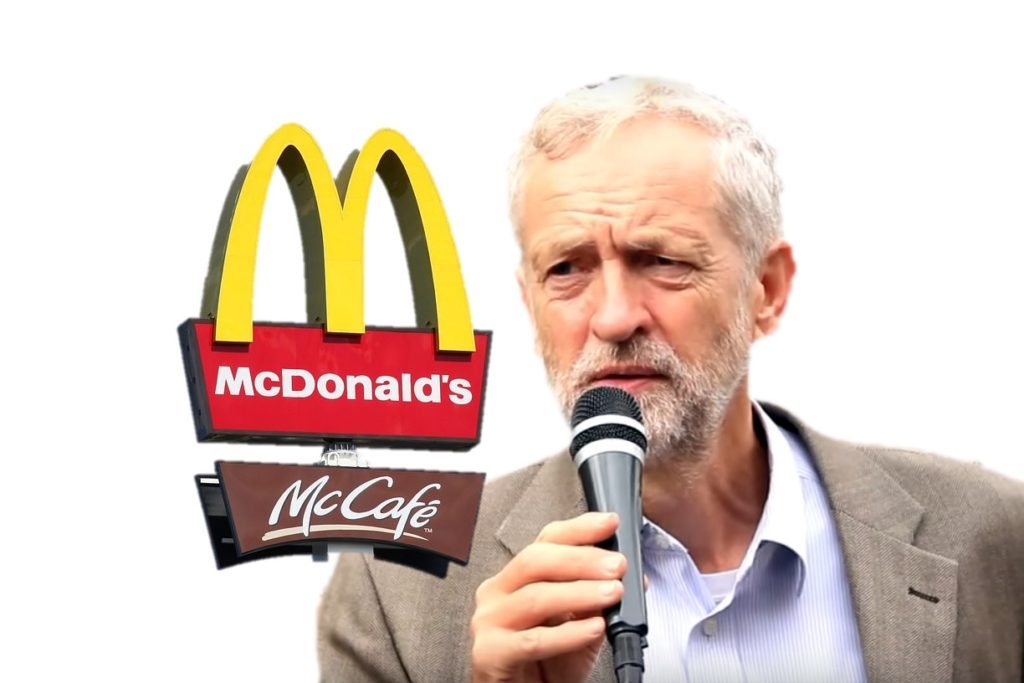 Labour has just refused to associate itself with fast-food giant McDonald’s. In response, the right-wing media and some Labour backbenchers have jumped at the chance to criticise Jeremy Corbyn’s leadership of the party. But there are many excellent reasons for standing up to McDonald’s.

The fast-food chain wanted to have a display at this autumn’s Labour conference in Liverpool. The £30,000 reportedly offered would have been a good little earner for the party, but it was turned down by the Labour National Executive Committee (NEC).

smacks of a snobby attitude towards fast-food restaurants and people who work or eat at them.

We are not in a position to be turning down money. It’s a mixture of the snobby attitude and somebody thinks it’s the healthier option

The Daily Mail, meanwhile, went with the headline:

The truth behind the decision

But the real reasons for shunning McDonald’s had nothing to do with ‘snobbery’ or Corbyn’s dietary choices. According to HuffPostUK, the decision was actually based on McDonald’s poor record on recognising trade unions and its “reputation for zero-hours contracts”. The paper insists that the NEC was:

The BFAW claims that McDonald’s managers have stopped its activists from trying to attract new members and from leafleting fast-food workers. On Twitter, its ‘Fast Food Rights’ campaign says McDonald’s should work together with the BFAW if it wants to improve its reputation:

#bbcdp #Mcdonalds should meet with the #bfawu if it wants to be treated like a respectable employer pic.twitter.com/mi7eNYCVq8

Standing up for workers’ rights

In the USA, fast-food workers are currently involved in a fight for union rights and a living wage. The ‘Fight for $15’ movement insists that people should not struggle to make ends meet if they work full time. And Jeremy Corbyn has supported these workers:

It's Fast Food Global Day of Action. Solidarity w/ workers across the world who are fighting for decent pay & rights at work #fastfoodglobal

After the recent NEC decision to ban McDonald’s, the ‘Jeremy Corbyn for PM’ page on Facebook insisted the issue:

isn’t some spat over “posh food” vs “junk food”, or just about obesity – it’s the fact that for years, that company has been at the forefront of anti-union practices which affect the daily lives of thousands of their workers across the globe. Low pay, union busting, environmental degradation and tax avoidance aren’t middle class, academic concerns, but issues that go to the very heart of our society and how we organise it.

McDonald’s claims its workers are entitled to join unions and that it is now giving them choices about the type of contracts they want.

Other critiques of McDonald’s

McDonald’s has not only been criticised for how it treats its workers. Here are some other factors to consider:

If Jeremy Corbyn’s Labour party spoke about workers’ rights, the environment, and healthy eating but then accepted money from the likes of McDonald’s, it would almost certainly be accused of hypocrisy. The Conservatives and the SNP, for example, have inevitably lost some credibility on these issues after accepting the presence of McDonald’s at their own conferences later this year.

By banning McDonald’s from its 2016 conference, Corbyn’s Labour has shown consistency between its words and its actions. And however much its opponents try to belittle this decision, such consistency shows courage.