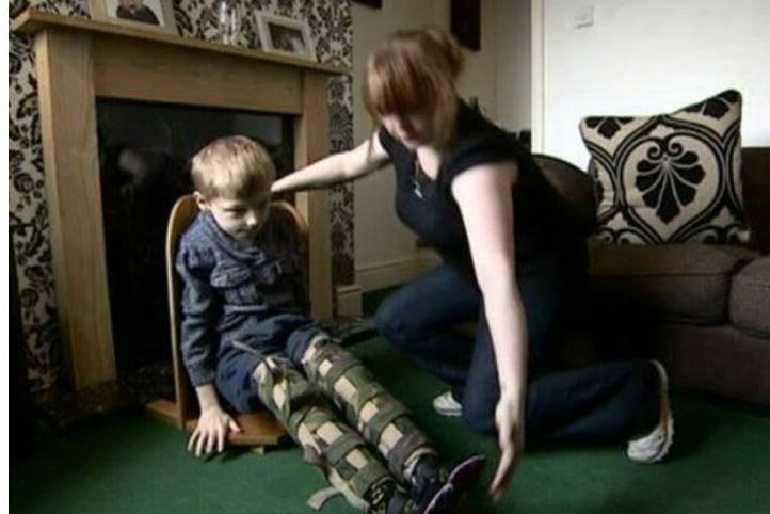 Ben Baddeley is 11 years old, and has cerebral palsy. He’s sought NHS funding for life-transforming physiotherapy, but has had his requests rejected. For this reason, he is now taking his fight directly to the Prime Minister.

Two years ago, Ben had major spinal surgery. NHS funding for the operation was cut, with commissioners deciding there was not enough evidence that the surgery and treatment were cost effective. Fortunately, Ben’s family managed to raise the money for the operation.

Ben previously had spasticity – or muscular tightness – for 10 years. He now has the muscles of a one-year-old child. For that reason, Ben’s mother Amy explained to The Canary, he requires treatment from a specialist physiotherapist three times a week. She explains the importance of this therapy:

He couldn’t feel anything past his ankles before, but he can now rotate his ankles and wiggle his toes – and actually feel it… He is absolutely delighted to be able to join in with everyone, walk on his own, go to the high school all his friends do.

The problem is that he has not received funding for further treatment. Amy explains:

Ideally he should be moving onto hippotherapy to support the work he has done with his hips but there isn’t anywhere close to us from what we can see and the cost is stupid.

At the moment, Ben’s family is paying for the treatment through fundraising activities. But this is taking its toll. Amy insists:

He is fed up of fundraising. He says it’s taking up too much family time… He can’t understand why the Prime Minister won’t fix the NHS to put everything right for everyone. That’s made him disappointed.

Amy says that only four hospitals in the UK currently undertake the surgery and treatment given to Ben. She adds:

Currently, absolutely no one can actually get funding on the NHS for the type of treatment Ben and the other cerebral palsy sufferers need. It does not exist anymore… At the hospital that Ben was under, there were 500 children affected. And those 500 families are in the exact same situation as us.

Between four hospitals, that leaves the families of around 2,000 children scrambling around to fund life-transforming treatment all by themselves.

Taking the matter up with Downing Street

In March 2016, Ben wrote a letter to the Prime Minister, but was unsatisfied with the response. According to his mother:

The Prime Minister hasn’t answered any of Ben’s questions and hasn’t offered any way to resolve Ben’s situation. Ben is still in the same situation and the only difference now is that the Prime Minister knows about it and chooses to do nothing.

This is the letter in question: 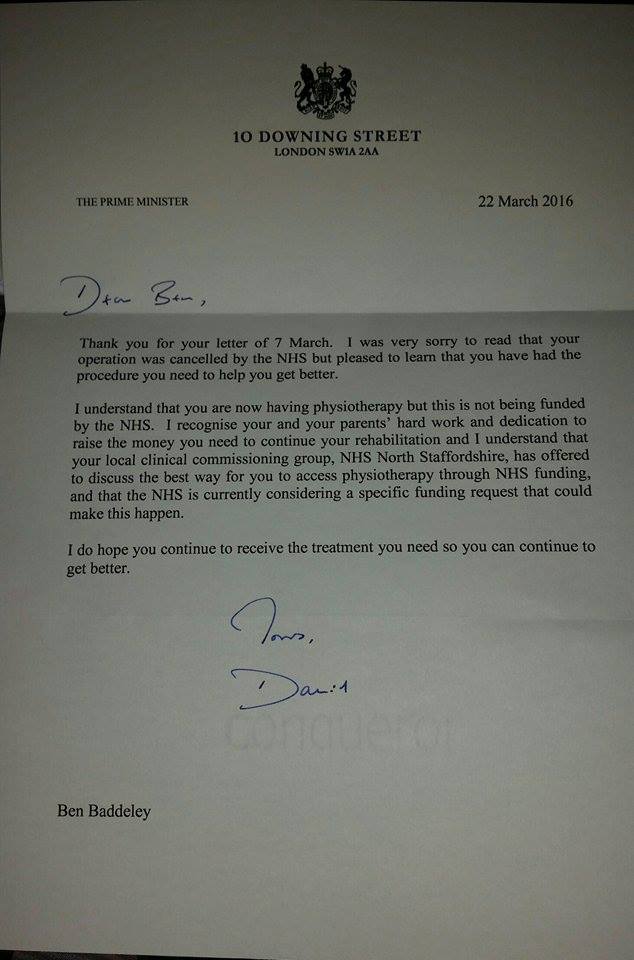 Ben was annoyed by David Cameron’s unhelpful response, and said:

that’s not much use to me

He soon penned the following reply:

If the situation doesn’t change, his mother says:

His muscles will waste away before they have time to stabilise. They will go tighter and the scar tissue – which hurts him the most – will just stay there.

In this desperate situation, Ben recently asked if he could hand a new letter in at 10 Downing Street. On 18 April, Amy received a response, confirming that Ben could hand-deliver a letter to Number 10 himself on 4 May.

But Ben’s situation is not rare. Around one in every 400 children in the UK is affected by cerebral palsy. Since Ben’s operation, an NHS trial has given the same surgery to only 100 children. And although this trial has been successful, NHS England says it will take at least 18 months to evaluate the results.

The NHS is currently under immense pressure for a number of reasons:

Ben’s fight embodies the struggle to save the publicly-funded NHS from the Conservative government’s ideological attacks. He is also carrying the hopes of so many other cerebral palsy sufferers on his shoulders. Let’s stand alongside him in this battle.

– Show your support for children in similar situations by signing the following petition.

– See other Canary articles on the current state of the NHS here.