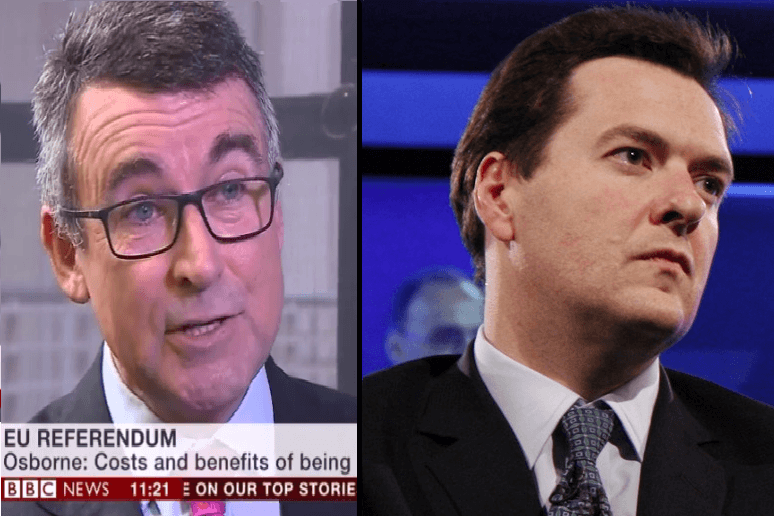 Conservative MP Bernard Jenkin ridiculed George Osborne’s economic predictions on BBC News this week. Osborne’s report found that the UK economy would shrink by 6.2% by 2030 if we Brexit.

The MP for Harwich and North Essex rebuked Osborne’s claims by saying what many have been thinking:

He can’t forecast anything.

Jenkin recalled what Osborne said in 2010, where he promised:

The cyclically-adjusted or structural current deficit will be eliminated by 2014-15.

The deficit is the difference between what the government spends and receives. In 2010, the government was spending £103bn more than it received. By 2015 this was down to £50bn – no where near Osborne’s predictions. In 2013, David Cameron said “we are paying down Britain’s debts”. Really, no debt has been paid down whatsoever – Osborne has only piled it on.

Not even the deficit is back to pre-crisis levels of under £20bn. As long as the deficit exists, the government is not “paying down” debt – it is adding to it.

Osborne has only made it halfway to his deficit reduction forecast. Does this mean we should half his Brexit prediction? Well, other economic forecasts actually suggest that we should. Osborne’s flagship figure of 6.2% is much higher than six other prominent economic predictions. Four out of these six do not predict the UK economy would shrink by more than 3%.

But, stepping back from Osborne’s sky high claims, the reports are still not good news for the Brexit camp. Only two of these forecasts found that Brexit could have a positive effect on the UK economy. And even these two estimate that a negative impact is more likely.

Jenkin was not the only Eurosceptic Tory MP to have a pop at Osborne. Here’s some of the most scathing responses:

I've read some laughably spurious economic reports in my time but this one takes the biscuit. #VoteLeave https://t.co/J2PsnpfbO7

Given the Treasury adjusts its own forecasts every six months, these predictions need to be imagined after 28 revisions

How the Tories are supposed to get back into bed with each other post-referendum remains to be seen.

But it does not matter whether one supports Brexit or not, Osborne should be condemned for his fear tactics and runaway ‘predictions’. He should be condemned alongside Brexiteer Michael Gove who claimed on Tuesday that we are being “held hostage” by the EU. When it comes to the Conservatives, it is project fear from both sides.

Let’s take a step back from the Tory show:

On BBC News this week, Jenkin said what we’re all thinking: Osborne couldn’t predict the weather in space.

Keep writing to your MP to express any discontent.

If that’s not enough, you can pledge to take direct action.

Featured image via Youtube and Foreign and Commonwealth Office/Flickr.